Test cricket is just that – a test; a test for players and often a test for spectators and today was one of those days with only two wickets to fall all day as NZ moved from 144/4 to 394/6.

Interestingly the first session was played in almost complete silence – as if prayers had been called — and given the reasonable crowd and number of locals, it felt most odd.

Also there was a DRS review which was in process when then on field umpire then repeated his original decision. Does that they nullify any decision by the DRS official or is DRS all powerful? Interesting question?

NZ reach 224/5 at lunch with Nicholls the only wicket (and that to Root – his bowling has probably been his best suit so far…batting and captaincy seem to lack a lot.)

Watling is still there – slowly progressing, nurdling and nudging; playing the perfect innings for his side but he is an annoying player – not in the Steve Smith fidget sense – but in his limpet like approach. Ideal for test cricket!

The new ball is taken immediately after lunch (the morning session probably honours even) but could have been taken just before lunch but there we are. Curran S was given the honour with Broad at the other end but like all new ball spells here, there was very little for the faster bowlers. Watling and de GrandHomme both reach their 50s – the latter coming from behind to reach his first.

The afternoon session was really tough – the heat was oppressive, for everyone and with no cover or shelter every shadow space was taken.

Tea is taken at 315/5 – deffo NZ’s session – and as I walked round the ground seeking shelter and rehydration, I noticed the third element of a TMS favourite come into view – from this ground you can see regular trains, boats and planes! Oh for my Blowers of long ago!

So…the question for the afternoon I kept asking was – why not use Stokes? And lo and behold, first ball after tea Stokes takes the second wicket of the day – de GrandHomme for a fine 70.

Spin tends not to win matches in NZ – NZ spinners have not taken a wicket at home for the last 11 innings! So why was Leach used so much? Anyway, ours is not to reason why…

And that was England’s last success of the day – Archer seemed to think that bowling a bouncer almost every ball, or look as if he’s planning to was the way to take wickets and as a result got tonked about a bit. Broad was economical, Stokes all heart as ever and Leach…

Meanwhile as the England body language seemed to speak volumes, Watling just carried on and on and on…ending the day at 119no (the first time a NZ keeper has made centuries in consecutive tests) and Santander on 31no – 394/6 and a lead of 41.

A draw seems the only likely result but two quick wickets tomorrow and a fine century opening stand…then anything is possible; all we need to be is resolute in standing up to the test!

But Watling is taking NZ streets ahead! 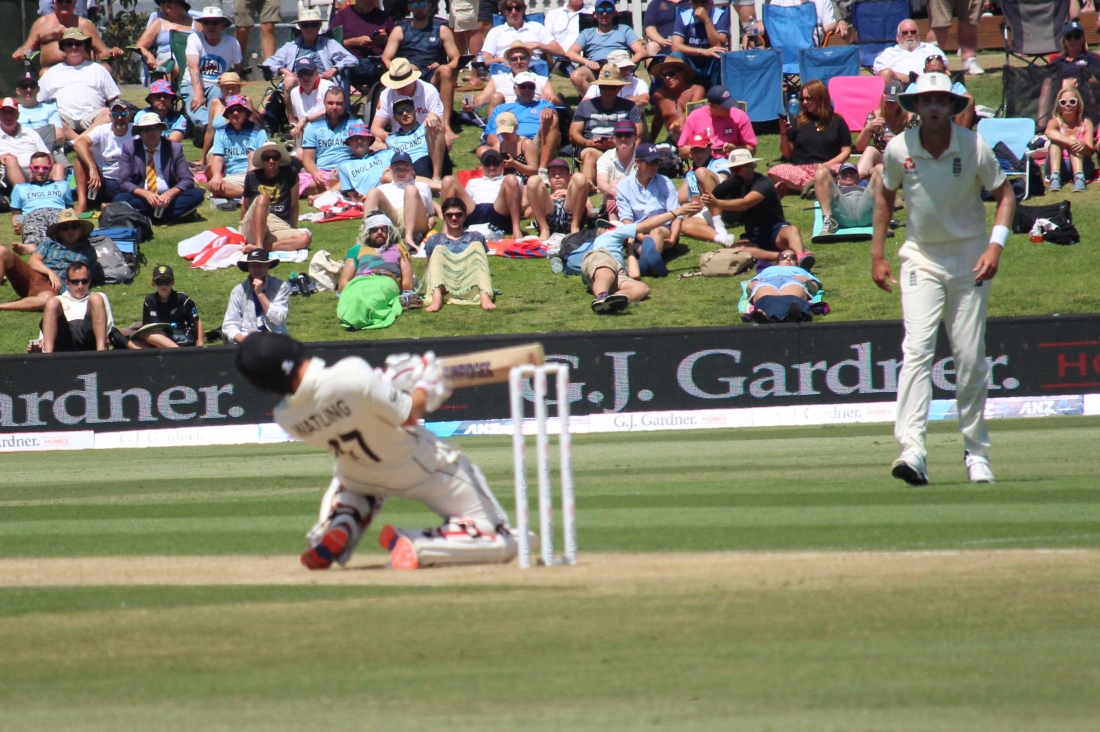 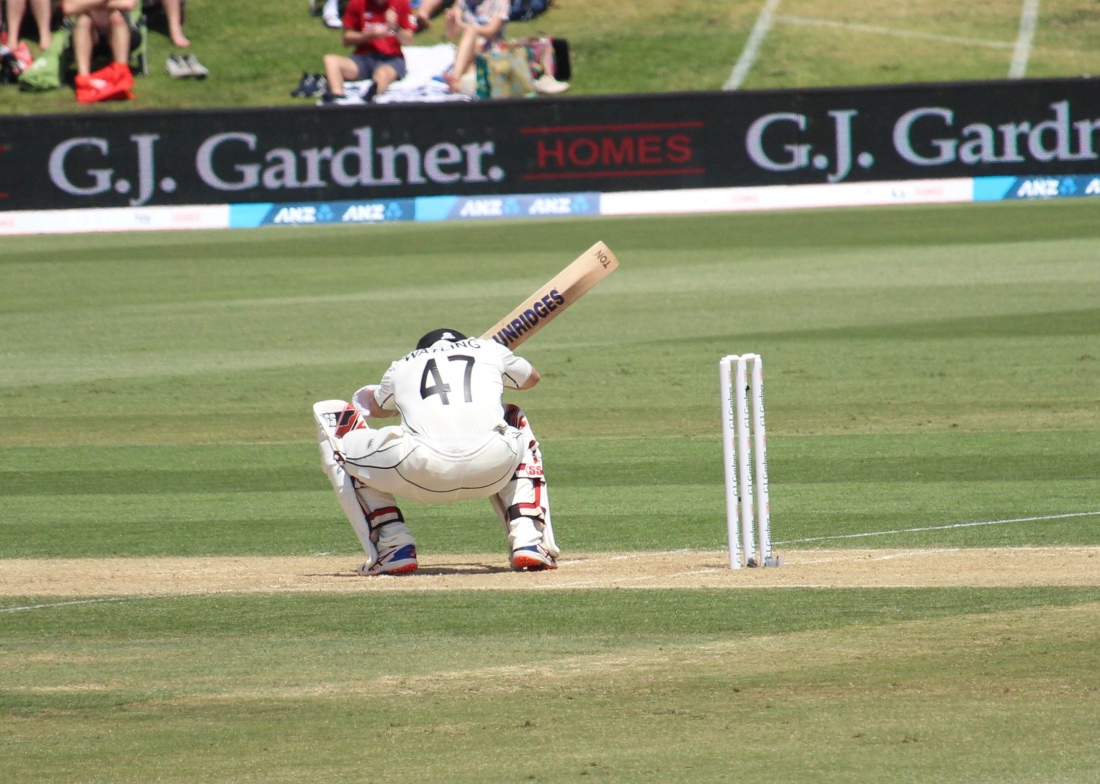 Watling getting low to avoid the bouncer – but must also lower the periscope! 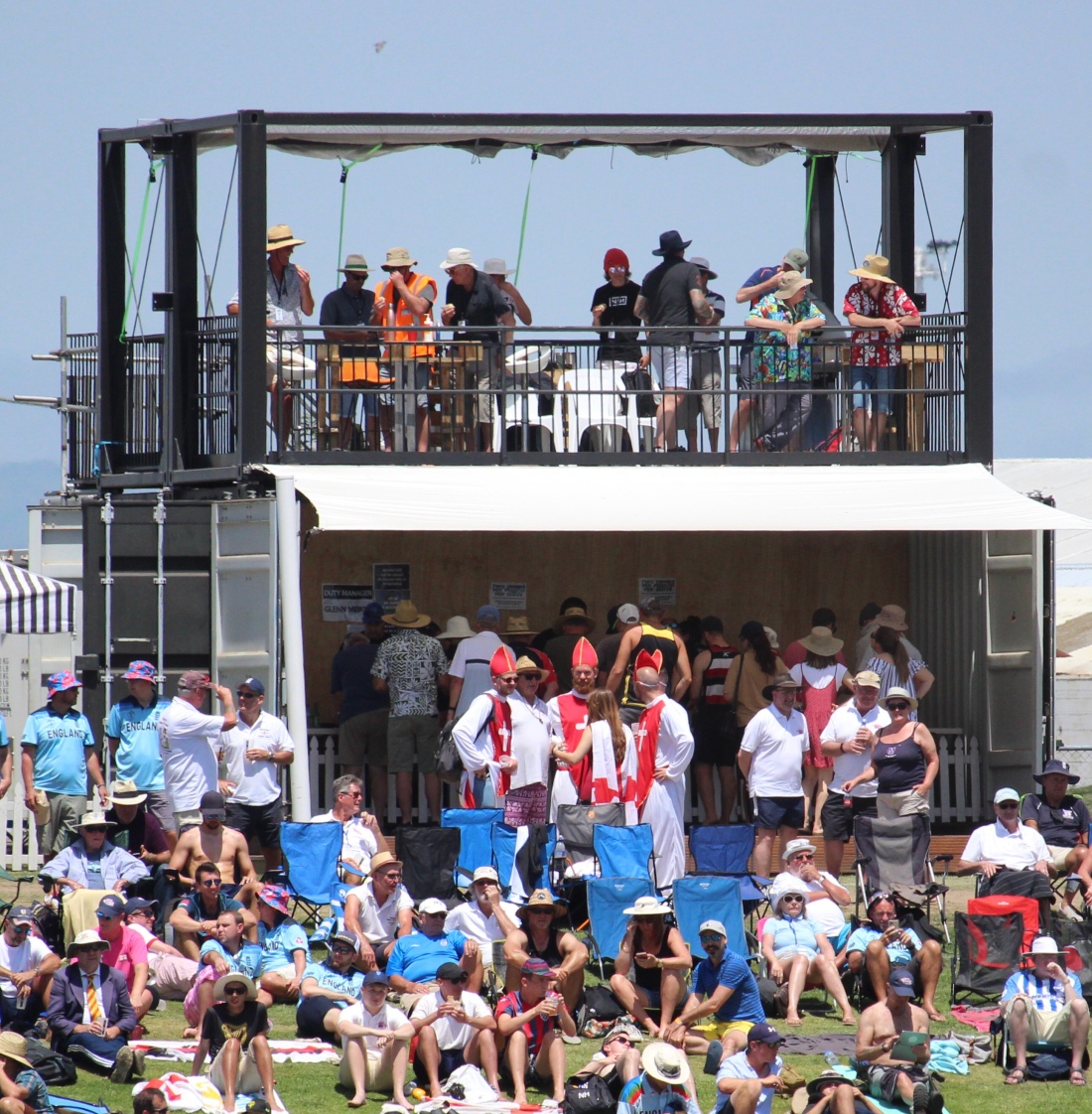 And the collective noun for a group of fancy dress bishops (boys and girls) is…? 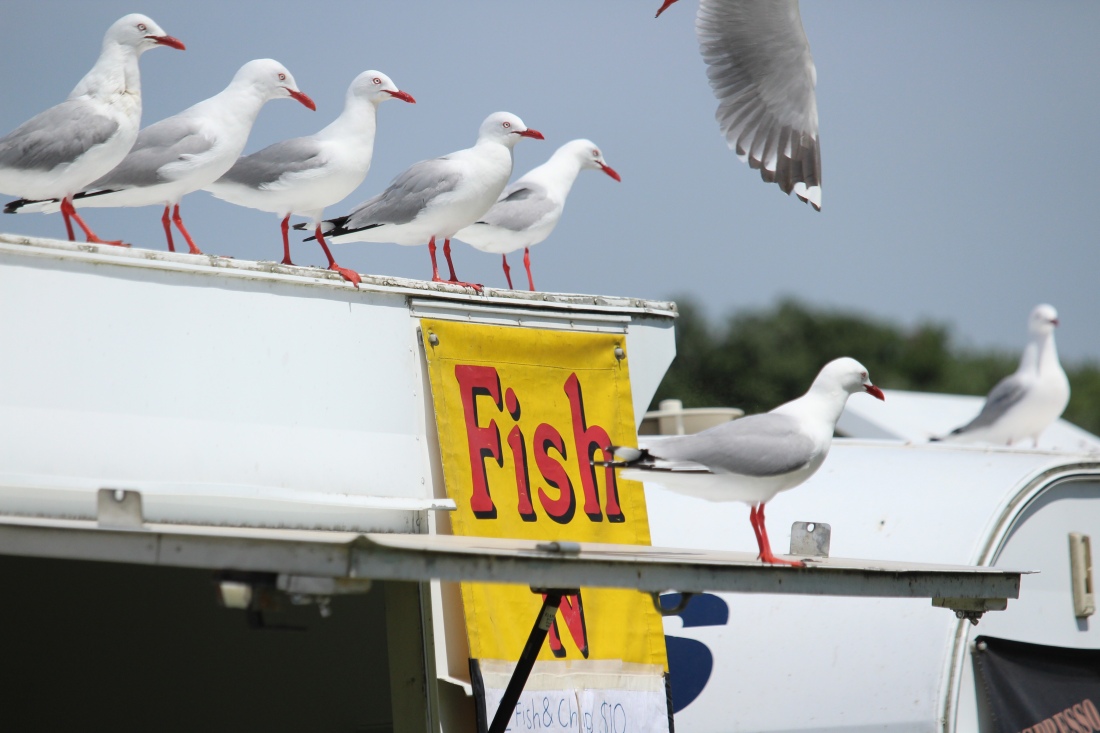 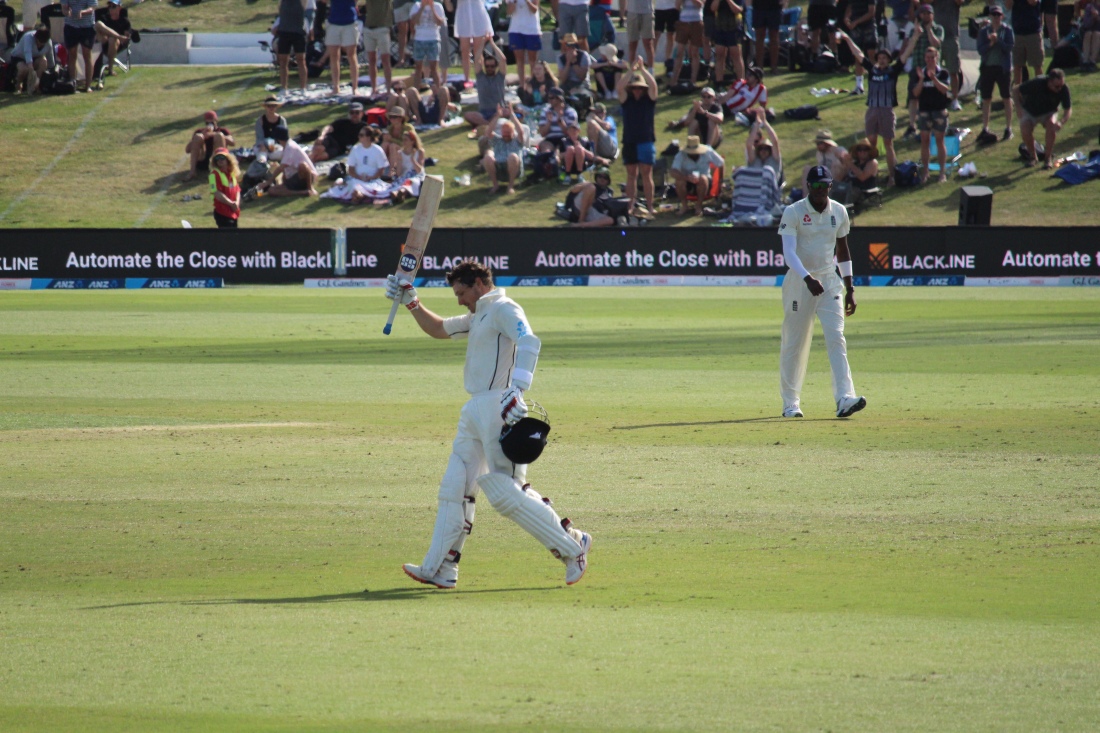 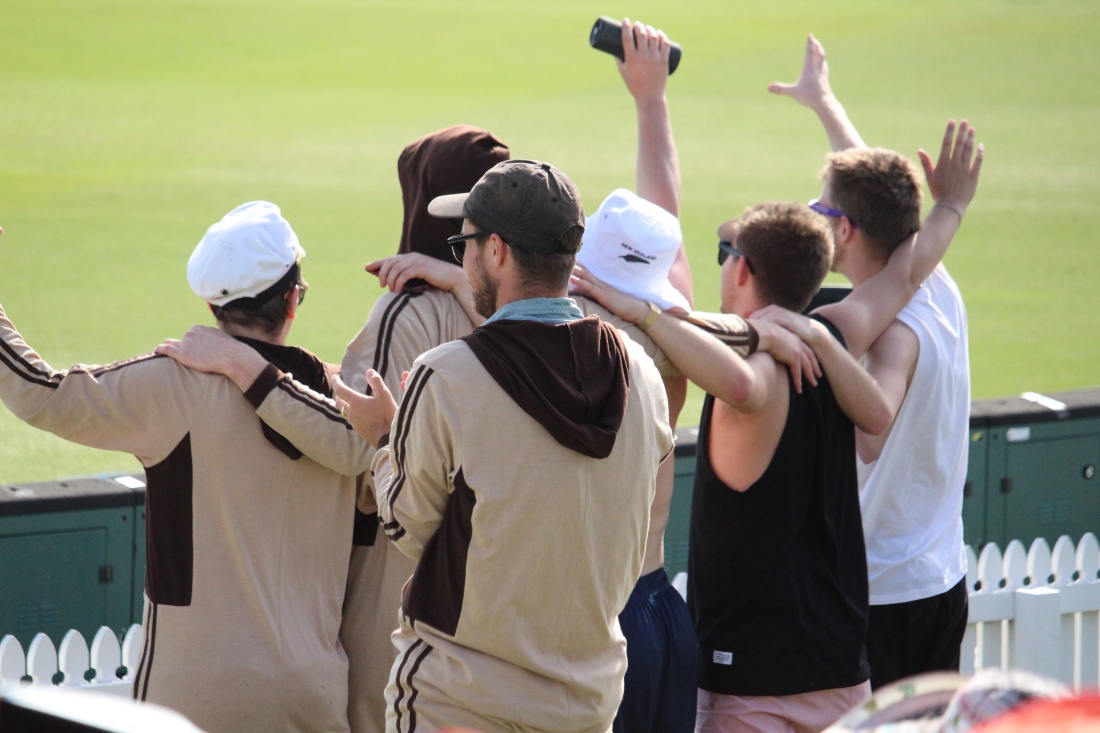 Watling reaches his 100 – and celebrates; as do the locals strangely dressed in onesies? 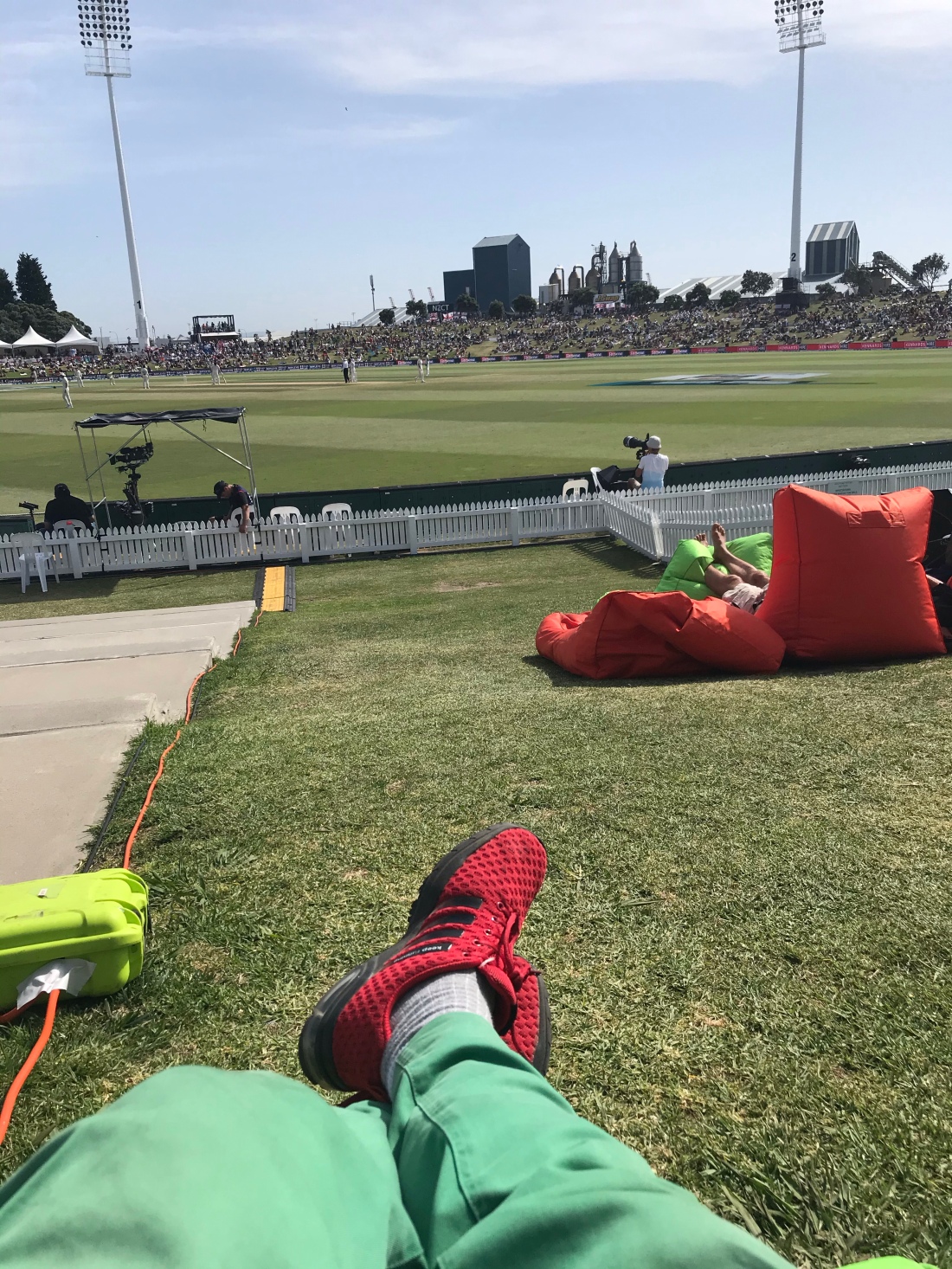 The perfect way to watch test cricket – on the embankment, sitting on a low-lying bean bag/chair. All I need now is someone to bring me gins and tonics on a regular basis and…all would be right with the world!