Firstly the good news is that there was no rain overnight so the bucket in my room was empty; whether the roof repair will be completed today remains to be seen but I suspect not. Let’s hope there’s no rain between now and Monday when the next stage of the odyssey continues on the tourist trail before the sights, smells and sounds of Colombo next week in readiness for the last test. 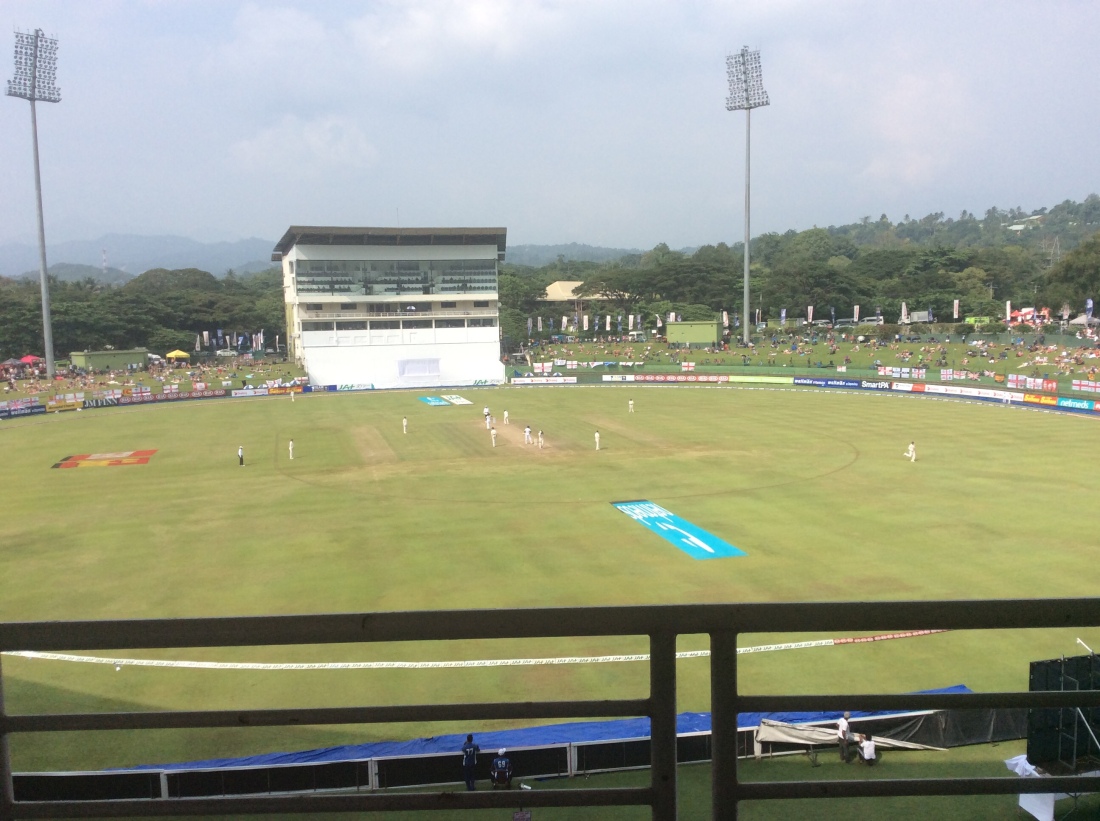 Talking of cricket…Play starts 15 mins early today to make up some of the time lost yesterday. Whilst the forecast has been for rain to save SL, the day dawns bright with a small breeze and less rain today. Tomorrow could be different but the match should be over by then.

England add useful runs to extend the lead to over 300 before SL take the new ball, mid-over, and strike with the first ball. Foakes makes 65…he is really maturing into a class batsman and currently best keeper in world cricket.

SL need a mammoth score and have two days to get there or alternatively bat until the rains come. There’s only one winner from here it seems.

And losing three wickets quickly to be 26/3 looks like the wheels are falling off already and one wonders how much play there will be after lunch but the clouds are gathering in a non-threatening way at present as Dimuth and Mathews start a rebuilding exercise. Leach opens the bowling with Jimmy and one wonders when the last time was that England opening bowlers first names started with J or the same initial…some one somewhere will probably know.

The crowd is similar in number to yesterday but with a larger and more vociferous local level of support which all adds colour to the day.

At lunch SL reach 93/3 with Dimuth on 54no. Another 208 needed to win or seven wickets to take. Odds still favour England but who knows? Rashid was brought on just before the break and thought he had a last minute success which was turned down on review. Nothing special with that but rushing towards the umpire whilst giving voice to a second act to his appeal was not appropriate. I expect to hear of some kind of censure- after all Root has been penalised for petulance but to me this was worse.

Have taken advantage of the compensation package of free lunches and drinks everyday, my decision to tarry over the trifle meant that I missed the first wicket after the break when Dimuth was brilliantly caught (reaction catch) by Stokes leaving SL at 103/4 and looking at staring at defeat. That was despite cutting short a lady from Lancashire retelling her adventure on a local safari between tests and rats devouring all the toilet paper; swapping stories of our travels with others is one of the joys of this tour – and probably others as well – but she was in such paroxysms of laughter at my bucket adventure I thought she was in urgent need of it!

At this point, the tour manager for the group I’m in leans over to tell me to write how wonderful he’s been (so far)…but those stories are for another day and another blog. Mathews and Roshen strive to steady the ship as drinks approach and the feeling of rain in the air intensifies which could mean we’re back tomorrow but…?

Drinks mid afternoon and 151/4 Mathews 55no. England need a plan other than spin at both ends and wait. Another 50 or so from this pair…Mathews and Roshen and things get interesting. Wind has picked up to cool the air but perhaps speed up any rain? The atmosphere from the locals is enhanced by the SL cheerleaders who out-Barmy the Barmy by taking one of their tunes and lyrics and become the Barmy Lankans – much more tuneful and rhythmic than the English version who have yet to acknowledge let alone respond! The Lankans are making the most noise of any group so far this series!

Just before tea when things looked well set, Roshen goes for 37 and a partnership of 73 with Mathews and brings England back into the game at 176/5. Both batsmen playing spin without the need for any sweeping just wrist, hands and timing. The damage here being done by Ali who so far today has had little to do.

Tea is taken – each session being 2h15 to make up for lost time – at 219/5. Another 82 needed or five wickets and 21 overs to go (if overs counted is an issue today) makes things interesting. Local knowledge is that there’s another hour of play before the rains come or light goes pre-thunder. But who knows? Forecast for tomorrow is for considerable rain but again, then too was today. With possibly 135 minutes to go today, a result is possible- either way.

Overall England aren’t making as much progress as perhaps the planners would have liked. The opening positions are still not completely resolved, the number three position as vague as ever, the added dilemma of Foakes or Bairstow, which is the number one spinner, when can we blood new players to give a better picture regarding the Ashes and beyond…and so forth. All will be revealed – or not – at some point.

An ominous sight at tea is the gathering of the ground staff…they must know something?

Shortly afterwards Mathews goes for 88, a fine knock in the circumstances but the umpires soon stop the game as lightning and rain are looming. SL are 226/7 – need 75 more with poor weather forecast for after lunch! Many tourists are not planning to come along and witness the finale but I shall.

One interesting point is that yesterday it was too dangerous for players to be outside in the lightning but ok for the 100 or so ground staff to be risked as they were soaking wet, walking on wet covers with lightning about!

I wonder by the time I get back to my hotel, will the clouds and rain have gathered there and will the need for my bucket follow?