Today is the first day of the first test between NZ and England. The first ever at Bay Oval Mount Manganui and a test debut for Dominic Sibley (England). And my first day of watching a test in NZ and what surroundings!

After the now-usual prelims, England batted after winning the toss with Burns and Sibley. Clearly the new approach is to score more runs than the opposition as opposed to scoring them more quickly, so the first hour sees the score reach 30/0 facing some fine Kiwi fast bowling.

From my viewpoint it wasn’t clear if the ball was doing anything but moving position to be with the ‘locals’ on the surrounding embankments and avoiding the harsh reflective sunlight at the first position, it’s clear that there’s more bounce from the Mountain End rather than the City End. Local colour just adds to the day and chatting to a Kiwi, I discovered he had just sold his cow, and would have more time therefore to go to the cricket!

Lunch arrives at 61/1 off 29 overs – Sibley gone for 22; he will go a long way I’m sure whilst Burns (who was out but given not out and no DRS) seemed to lack his usual fluency and is fishing a lot outside his off stump. Denly looks more composed.

And what a delight – the crowd was invited to walk round the outfield at lunch! Just wonder upon wonder and brilliant marketing to encourage the paying public.

The afternoon session ground out to 120/3 by tea – loose shot from Burns after his 50, and another loose shot from Root for 2. But this brings the current English superman to the crease. In the meantime Denly is approaching his 50. The bowling continued to be tight and chances went begging but at tea both sides would be happy.

The last session saw Denly leave late in the day for 74 after adding a hundred plus with Stokes who then took advantage of a tiring attack eager for the new ball to go to his 50 and beyond.

The day ends at 241/4 – England the happier no doubt but two quick wickets tomorrow morning and the complexion changes! NZ will need the new ball to work for them. Their bowlers were unlucky and will bowl worse than today and have better figures but that’s the game we love so much.

The projection is for a draw and given the generally benign nature of the pitch that’s probably a good call but we’ll see. 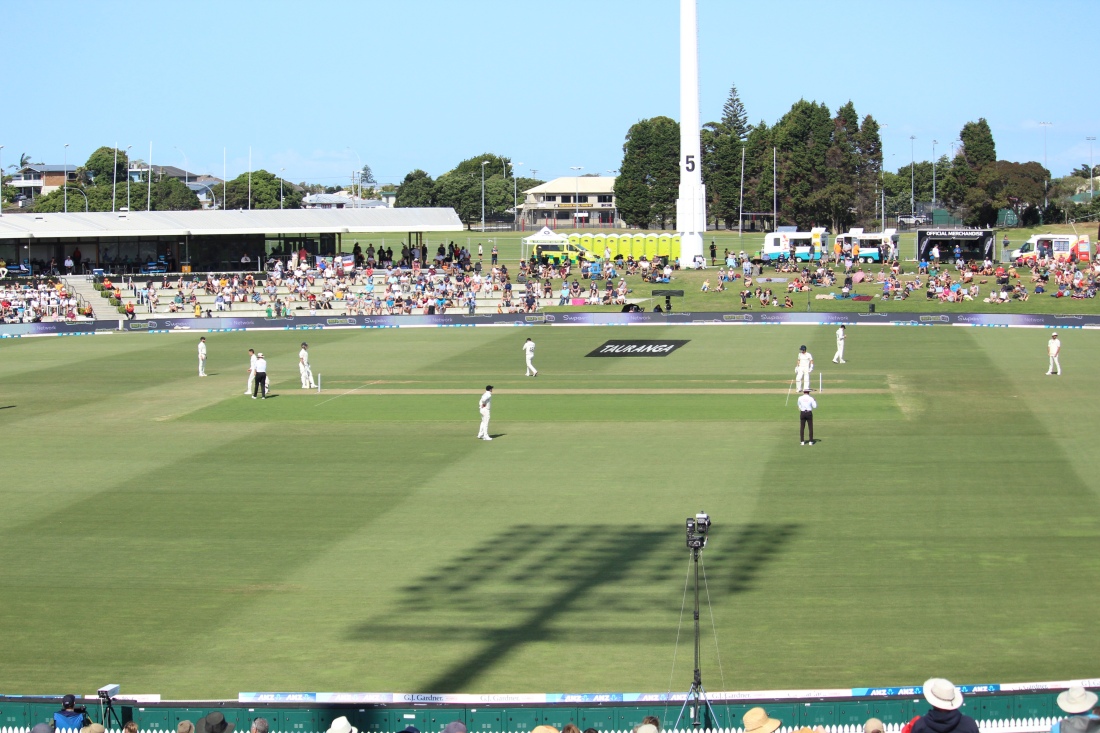 But for me today was a first and a second – the first as above and the second time I’ve been able to lay down flat at a test match, spread out and watch the game – pure bliss!