The usual style of my blogs is an ‘as is’ reflection of the game as it unfolds. Today I’ve done that but added this at the start – ‘am writing this paragraph at the end of the match in humble recognition that after 50+ years of following cricket, I still have no idea and that this lack of ability to understand this complex, frustrating yet thoroughly enjoyable game is not likely to improve during my time on this planet’

The day dawned to overcast skies and the threat of light rain which came to fruition just before the start in South London which was delayed by 10 minutes as a result but the overs remained unchanged at 50 per side.

Middlesex won the toss and decided to bat as the clouds lifted and patches of blue transformed the view into Simpson clouds. The pitch looks to have a touch of green about it, more so than all the others I’ve seen so far this season, so the decision to bat looks perverse. Anyway, those that know what they’re doing, know what they’re doing but as I gaze into the distance towards the Houses of Parliament glistening in the spring sun, I do wonder.

And so it is here too…Just over an hours play has Middlesex stumbling to 80/4 off 15. Gubbins 7no and Ross Taylor 11no with the wickets shared among the Surrey quicks and Batty as the spinner. Middlesex will do well to muster more than 265/270 but if these two can…? The team did it on Sunday against Gloucestershire but that was chasing not setting.

The weather threatens to be unsettled and changeable so chasing under our friends Duckworth, Lewis and AN Other could be interesting especially if early wickets fall. But that’s in the future…Middlesex need to consolidate first!

By the end of the second hour, these two have doubled the score to 148/4 off 28; Taylor 49no Gubbins 33no. Nothing spectacular by either side just grit and grind. Forecast now is still in region of 260/270 but as I write (and it seems to happen regularly this season, more than last), a wicket falls – Gubbins goes for 33 attempting a wide off side drive only to be bowled! All is not lost for Middlesex but this should be a low scoring game with the weather probably playing a greater part.

That aside, I wonder who Ed Smith has come to watch? The one day side is settled, the test side similarly or is he running his eye over future prospects? Gubbins perhaps, or checking up on those he’s ‘dropped out’ of the main stream? Stoneman, Malan, Foakes? Who knows but he’s as inscrutable as ever.

Well, what do I know? Middlesex scramble…that’s the best way to describe their innings…to 185/8 and look for all money as if they’re not going to make 200. But…Sowter and later Roland-Jones have other ideas as they extend the score to 241/9 and eventually 277 ao. Roland-Jones going for 45, stumped off a disputed wide but that’s not what the scorebook will show! Just stumped. 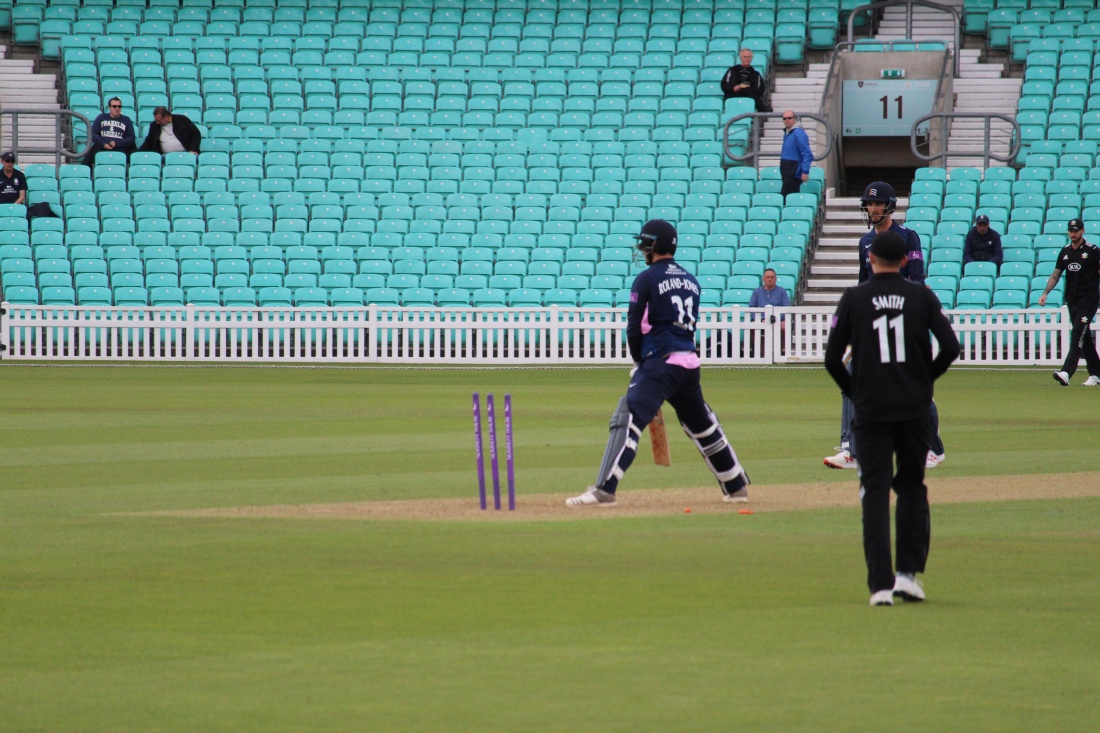 It’s a much better score than looked likely earlier on as perhaps batting conditions have improved, the pitch dried out and in the latter stages, spin from the Vauxhall End look more like challenging bowling! Batty was the pick of the bowlers with 4/29 off his 10 overs.

At this half way stage, it looks like Surrey’s match,the ‘middle’ falling probably 40/50 runs short. The weather is improving, the pitch getting better and Surrey’s star batting to come. But as we’ve seen before…it’s a funny old game!

An hour into the Surrey innings and after an early alarm at 23/2 Burns and Elgar have steadied the ship to 83/2 off 17 overs., Burns 25no and Elgar 35no. They have caught up with Duckworth helped by Middlesex not looking like taking wickets. Finn and Stirling particularly. But on sails the Surrey ship, it’s there’s to lose from here!

Two hours in and Surrey progress like a ship of state to 152/4 off 31 overs Burns has just gone for 49 so Foakes 31no and new boy Smith 3no are now charted with steering the ship into home waters. Middlesex seem to lack a plan to make things happen as opposed to letting things happen but then it’s the easiest game in the world from here in the Lock stand!

Light relief and bringing the inner Blowers out in a number of members was the sight of an urban fox chasing the shadow of a pigeon across the ground. Appearing from the members pavilion without clutching its membership card was also cause for concern as a few questioned…what the fox’s that?

So…what went wrong there for Surrey? With Middlesex at 185/8 they should have had them done and dusted for under 200 but they managed to add another 90! Batting at 152/4 off 31 they should have had the match home and hosed well before the allotted overs but no! The wheels slowly creaked and fell off and Surrey were all out for 240. It was only in the last hour or so that it went wrong. It would be churlish to blame Foakes as highest scorer in the whole match for both sides, but his failure to increase his scoring rate when needed – moving away from his nurdling approach to something a bit more aggressive- could be a reason. Poor selection may also have been the reason- no Pope, no Curran T etc…but who knows?

The loss by Surrey makes it difficult for them to progress to the top three whereas the new lease of life for Middlesex carries on.

But for the whole match other than the last hour or 90 minutes it was Surrey all the way and few of those watching felt otherwise; so well done Middlesex and it just goes to prove, like Manuel from Fawlty Towers, I know nothing, nothing!