Before we get into the details of this match, thoughts pass across oceans and time zones to Sri Lanka and the appalling events from overnight. There is no friendlier nation or people so why, who and how etc are for others to try and answer, all any of us can do is to offer support and kind thoughts to those affected.

Here at Lord’s a goodly crowd has arrived before the start of play in this one day Royal London cup match. Both sides are unbeaten to date (ok, they’ve only played one match each) so someone’s record will go today.

Middlesex win the toss and toss elect to field. The pitch looks a little more green than others to date and for those who know Lords, the pitch with what looks like a fairy ring is being used. I’m sure it’s all ok.

The first hour sees Gloucestershire reach 78/2 off 15, Dent having just been dismissed for 47. Batting stances seem to differ the world over but if it works for you, then fine but Dent’s of one foot pointing down the pitch whilst the other is orthodox just adds to the mix! But it seems to work for him. Murtagh in control – seven overs 1/27 – stemming any flow of free scoring. The middle overs for Middlesex look like their weak spot in this team – Stirling and Malan need to share them between each other. A run rate of 5.2 suggests lower scores than of late in this competition.

One distinct contrast between the promotion of the game here at Lord’s compared to Chelmsford is the silence of the PA announcer, the lack of music between overs or for any boundary (even 4 extras get their music played), and the more sedate and calm approach overall. The idea here at Lord’s is to let the cricket do the talking! I suppose both work in their own way – numbers here at Lord’s match those at a Chelmsford on Friday so it’s not the non-cricket entertainment that’s the draw!

Hour two sees Gloucestershire progress to 193/3 off 32 overs: Bracey 72no off 51 and Howell 35no off 44. All pretty standard stuff – they should now score in excess of 300 when at one time 260/270 seemed all that they would muster. The sun shines, the temperature picks up, the greenery of Lord’s is something to behold and as I soak it all up, everything seems right with the world- if only that were so!

That well known firm of Bracey, Howell and Dent clearly form the backbone of the Gloucestershire batting as the team ambles rather than scrambles to 283/7; Bracey made 83, Howell 55 and Dent, as we’ve seen 47. The team should have made more but tight bowling by Murtagh, Malan and Souter kept a tight lid on things. I reckon Gloucestershire are at least 40 runs short of what should be a par score on this pitch, but we shall see. What I have seen and as a stat I am confident that it won’t be matched today is that we’ve seen a half-century by a Frenchman here at Lord’s – and I wonder whether that’s ever been done before but my new Playfair states that Benny Howell was born in France and has three first names to boot! Now that’s a statistical combination to savour!

The first hour really defies description! Middlesex and Stirling in particular go off as if they’ve heard that the proverbial last bus has already left! Stirling is high risk but high reward and at 30/0 in no time against what looks like an innocuous bowling attack, the future of the match looked short lived. However, one wicket became two (Simpson returned one to the bowler which seemed to stop on him) and two became three as Malan tried to force the pace. At 36/3 it looked like the wheels were coming off and being 60+ runs behind the Duckworth Lewis, it seemed so. Bowling from the Nursery End seems to provide the quicks with more assistance than seemed likely at first glance, and watching Murtagh should have given everyone the key! Worrall for Gloucestershire has done well after a poor start. Stabilised at 103/3 after 17 overs with Morgan 38no and Eskinazi 26no they seem to have caught up with Duckworth but as I write, Morgan goes caught behind off Liddle from the Nursery End and the par score shoots up. The next hour should provide more clues!

And so it does! Consolidation from Eskinazi and Gubbins take Middlesex to 206/4 off 32 and a hundred partnership well over a run a ball in less than no time. Eskinazi 72no off 67 and Gubbins 54no off 52…and nearly 40 ahead of Duckworth! This looks like Middlesex’s to lose but we’ve seen odd things before. The Gloucestershire bowling at this stage seems much of a muchness but if 206/4 becomes 226/6 then it starts to look a little different!

But I need not have worried – Middlesex win at a canter with no more alarums or excursions with several overs to play, Eskinazi makes his century whilst Gubbins needed two more but the win came.

There’s a new approach from this Middlesex side this season – clearly Stuart Law’s influence – the technical support team take their place by the boundary edge and even allowed incoming batsmen to appear from the ‘dug out’ rather than ambling through the Long Room.

One distinct area I noticed was the prevalence for Gubbins and Eskinazi not to go for airborne or lofted shots but keep everything grounded – and it worked. Something I need to watch out for next time.

So Middlesex are unbeaten in this competition and could be a good outside bet but I reckon it could be some time before another French born cricketer scores a half century at Lord’s- sacre bleu! 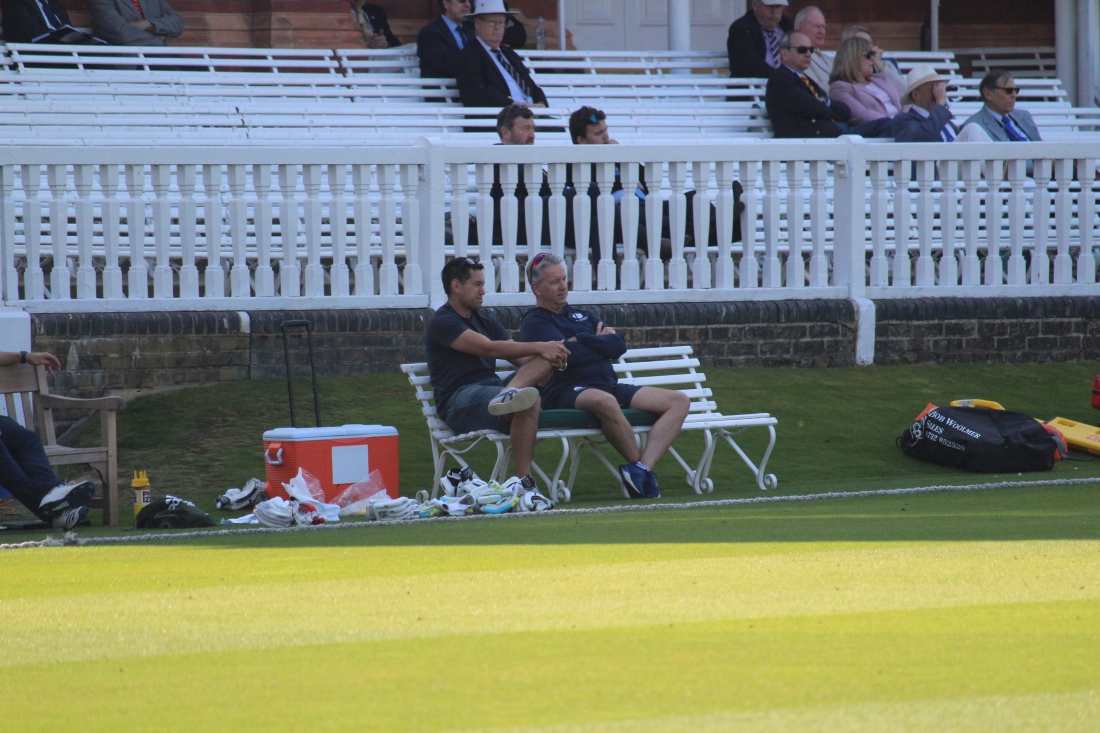