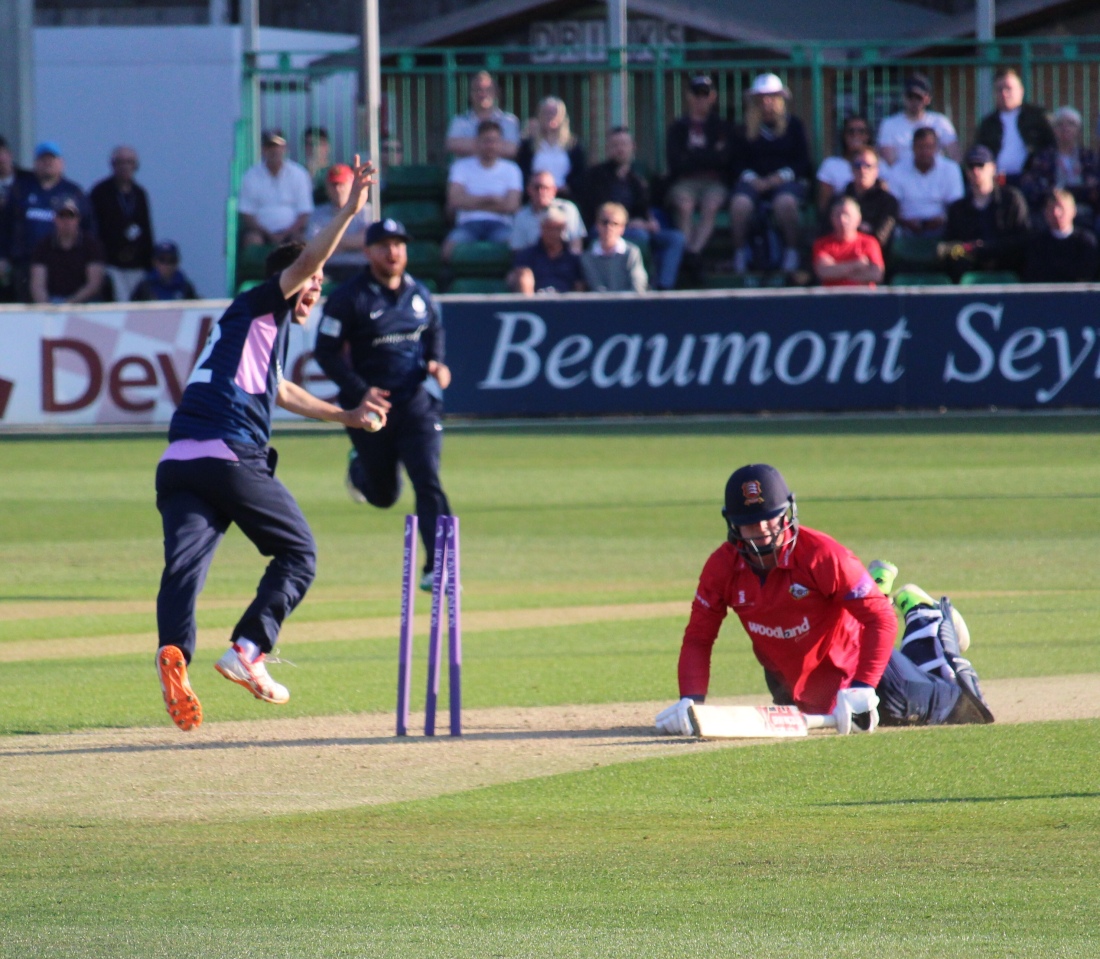 The first Essex home game of the season is a Royal London one day fixture against Middlesex. The great and the good (and the others) from Essex and a few from Middlesex have flocked to Chelmsford in good numbers attracted by the prospect of a fine day out and seeing Essex’s only cricketing knight in action. So this could be described as a ‘day/knight’ game,

The ground hasn’t changed over the winter and nor has the off-field philosophy- I get the feeling that Essex are trying to be something they’re not. The PA guy stands in the middle for the toss…audio only, why no big screen coverage and ‘interviews’ the Essex captain but not Middlesex! Odd!?

The anomaly of playing football rather than cricket skills has reached Essex but S Law – the new Middlesex supremo on cricket is having none of it! Everyone practices their cricket skills since that’s the game we’re playing! And of course this is Stuart Law’s first visit back to Essex since the…

And all this before a ball is bowled!

Middlesex are put into bat (odd decision given that the pitch is almost white, small boundary on one side and perfect weather); anyway they reach 94/2 after an hour off 16 overs, Malan providing the anchor with 40no off 45. Esssex have looked sloppy, Porter over pitching, whilst Cook S is extracting bounce from the River End and bowling at the end which is positioned on a rise in the ground and Ravi clearly asleep in the field!

However the main excitement in the first hour has been the collapse of the floorboards in one of the ‘temporary/permanent’ stand. No one was injured but if it were not for a photographer phoning the ground, no one would have turned up to repair the hole and so far, no one from the Ground authorities have been along to check those who fell through the hole are ok!

The second hour sees Middlesex progress to 200/4 off 30 overs, Malan homing in on a century. The Essex out-cricket has been sloppy and the ‘fifth’ bowling of Lawrence and Bopara brought a flukey wicket (Morgan) but they have been haemorrhaging runs with the rate approaching 7 an over. Porter and Harmer were recalled to slow things down and have succeeded to an extent. Middlesex still look good for 350+ if Malan stays as anchor and the rest score around him at a run a ball which seems to be happening. But the end of innings is on the horizon…but nothing I’ve seen so far changes my mind that one day matches have become runfests and the balance between bat and ball heavily geared to the bat!

Some of the captaincy decisions were perplexing in the least with some bowling choices just odd!

By the end of the 50 overs Middlesex had reached 366/8 with the usual end of innings clatter of wickets and runs flowing like the passing river. 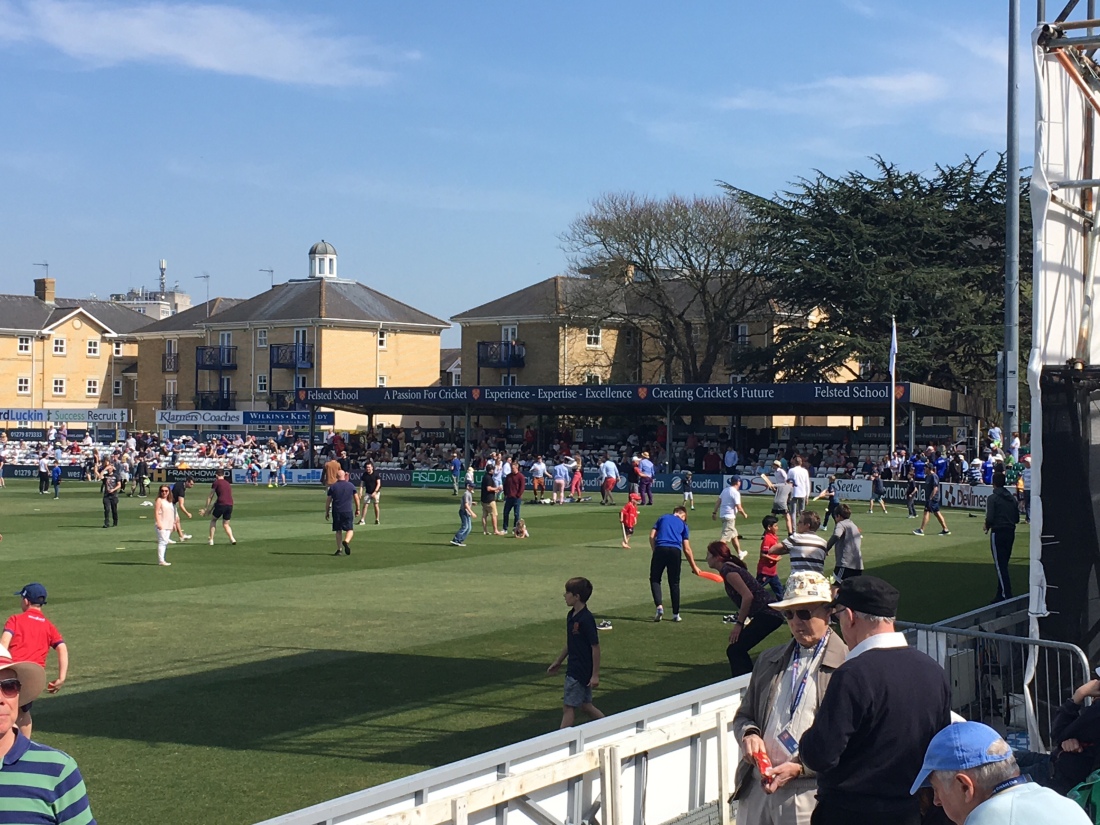 Essex reply gets off to a good start but then these games are runs first, wickets second. Cook (Sir A) departs for a modest 16 falling to the experienced Murtagh whilst Helm shows his lack of experience in his first four overs – going for nearly 10s and with wides to boot!

By mid afternoon a silence descends on the ground as Murtagh and Roland-Jones bring control and slow the scoring rate. Perhaps the crowd had lunched too well or were too tired after their mid-match exertions?

The silence is only punctuated by he constant PA person promoting everything from mushy peas to the next home match!

Looking round there are few clear spaces around the ground – when was the last match in April so well attended? And to think the wonders at the ECB are demoting this competition next year to a ‘development’ arena with no TV coverage and in parallel to the Hundred! And to think this is the format where England are expected to win the World Cup this year! Numpties one and all!

Anyway the first hour sees Essex reach 92/1 off 15 overs- Chopra taking on the anchor role. At this stage it’s Middlesex in the driving seat but we shall see.

What do I know? The second hour sees the game move away from Middlesex as Chopra 110no at the moment and Westley 77 add 158 to bring Essex to 219/3 after 32 overs. The only way Middlesex can win is to take wickets and so far, that doesn’t seem likely as the three spinners are doing manfully with only Sowter looking like and doing any damage. Essex are ahead on Duckworth/Lewis, need over 8 an over but with wickets in hand this should not be a problem in the current runfest mode that one day cricket has become.

Chopra falls for a century and after a couple fall for low scores, scoreboard pressure kicks in and wickets fall too regularly for comfort and eventually Essex lose by 38 runs. The champion for Middlesex was Sowter who took six wickets following the breakthrough against Chopra by Roland-Jones.

Overall it was ill discipline which did for Essex (poor bowling and captaincy towards the end of the Middlesex innings, loss of discipline when batting started to creak) but clear heads and the better control/discipline by Middlesex- they fielded more sharply, bowled maidens to exert pressure, kept their heads and self-belief and deservedly won.

But a good day for one day cricket, good crowd, good for Middlesex but a hard day for the knight!