A haze over the city or is it smog welcomes the fourth day of the 3rd test and probably the end of my live cricket watching for this calendar year. A year which began in Sydney at the bridge side, the debacle of the pink test (for England), strode across the English summer and ends here in SL. 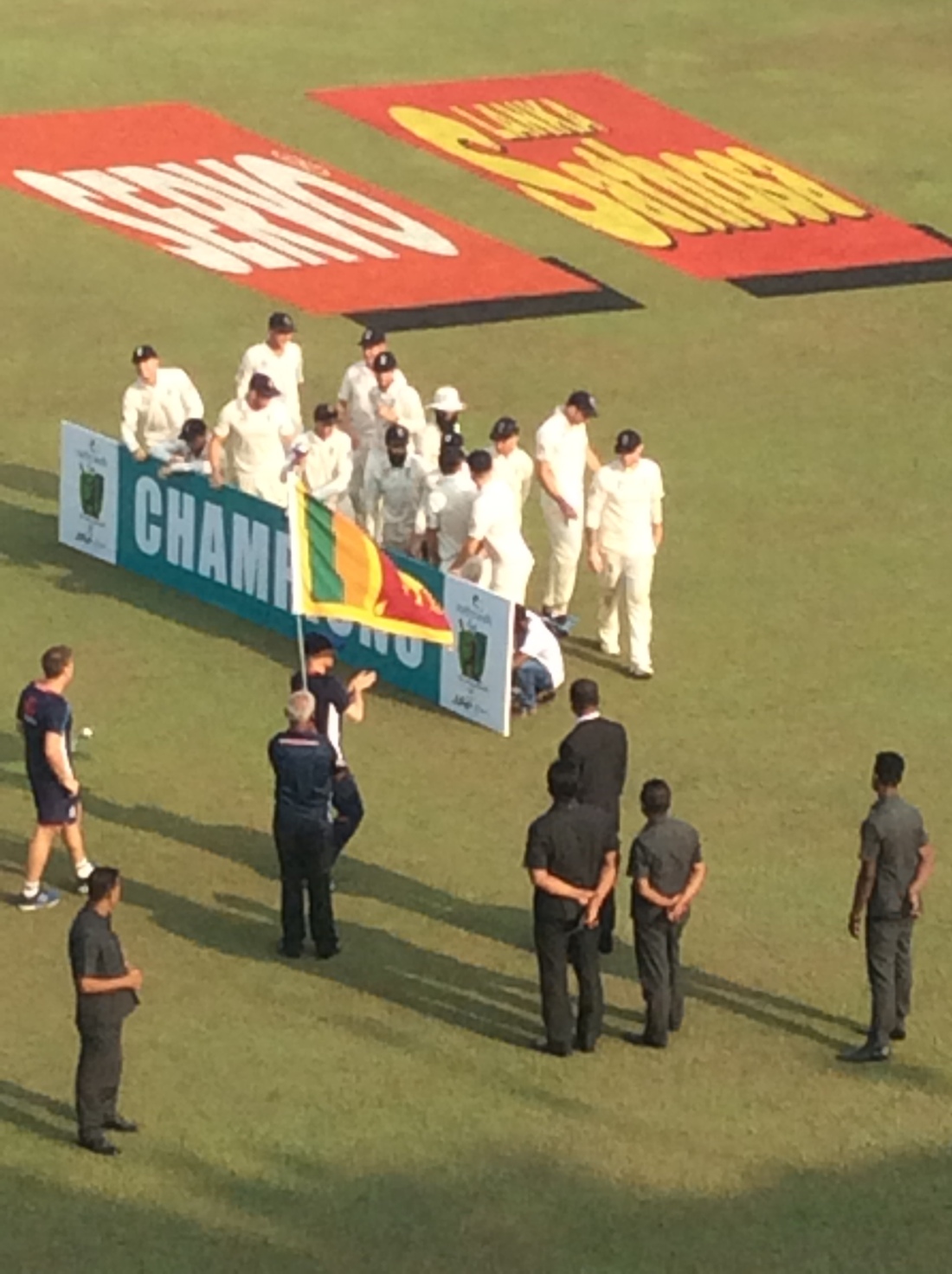 England need 6 wickets and SL oodles of runs so the betting is on a lunch time or early afternoon finish. A tense opening 40 minutes sees Sandakan as night watchman persevere but ultimately perishes for 7 and SL 82/5. Only one interruption so far but that was chivvied along by the umpires – at least they’re doing that right. It seems that there were six decisions changed on review yesterday and they’ve allowed one bowler to bowl 40% of his deliveries as no balls. Not good as we expect high standards.

The weather today is noticeably cooler with the strongest breeze of the whole trip billowing through the stands and across the ground. SL progress to 164/5 at lunch – more than half way to their target but there’s a sense of impermanence about the SL batting, one wicket will bring two and so forth. Mendis is 77no and Silva 37 have doubled the score since they came together.

The umpires seem to have taken the feedback on board and are noticeably helping bowlers with no balls (Stokes was called for a no ball for height which then went for four byes…he was not best pleased). The number of interruptions is also noticeably fewer and players are now asking umpires if someone can be called onto the field of play. Well done.

Well…that session had everything other than the kitchen sink. SL reach 284/9 after an extended session by 30 minutes as wickets fell. The lead now is only 42. Pushpakumara 42 no Lakmal 11 no. Previously regarded as rabbits they can hold their own! Mendis ran himself out for 86 after completing a century stand with Silva.

At that point 184/6 it looked like the wheels would come off on the omnishambles omnibus but no! Dickwella came and went for a breezy 19 in his style. Others made contributions so,that at 226/9 it was all over bar the shouting. But England again failed to deliver the killer blow; Roots captaincy slipping in playing the man rather than the game- namely trying to get Ali his fifth. Even an over from the Trent Bridge thunderbolt only succeeding in hitting Pushpakumara on the helmet with the first ball with the new ball. After five minutes and various ministrations he recovered and is still there at tea. Perhaps Broad was striving too much to get one wicket to go with the one run and one catch – his contribution to the match.

The umpiring is a spectacular debate all by itself. Refusing to give any dismissals today after giving everything yesterday strikes me as trying to redress the balance but it just makes things worse.

It takes just four balls after the tea break for England to take the final wicket and the celebrations begin. The PA system is partial at best, the presentation ceremony incoherent and only the England team and the man of the series and captain appear for Sri Lanka.

Today over rates were not a problem as it was cooler and the game less intense perhaps. The umpires were getting tougher too. I’ll talk about umpires in another blog, along with a revised review system idea I have but for the moment, enjoy the win, the series win and beating SL in Sri Lanka and having the more effective spinners.

I’ll also blog about the series as a whole and how England didn’t really dominate…but that’s for another time. It’s back to the hotel for a sundowner and to watch the sun set.

On the tourist trail tomorrow and Wednesday