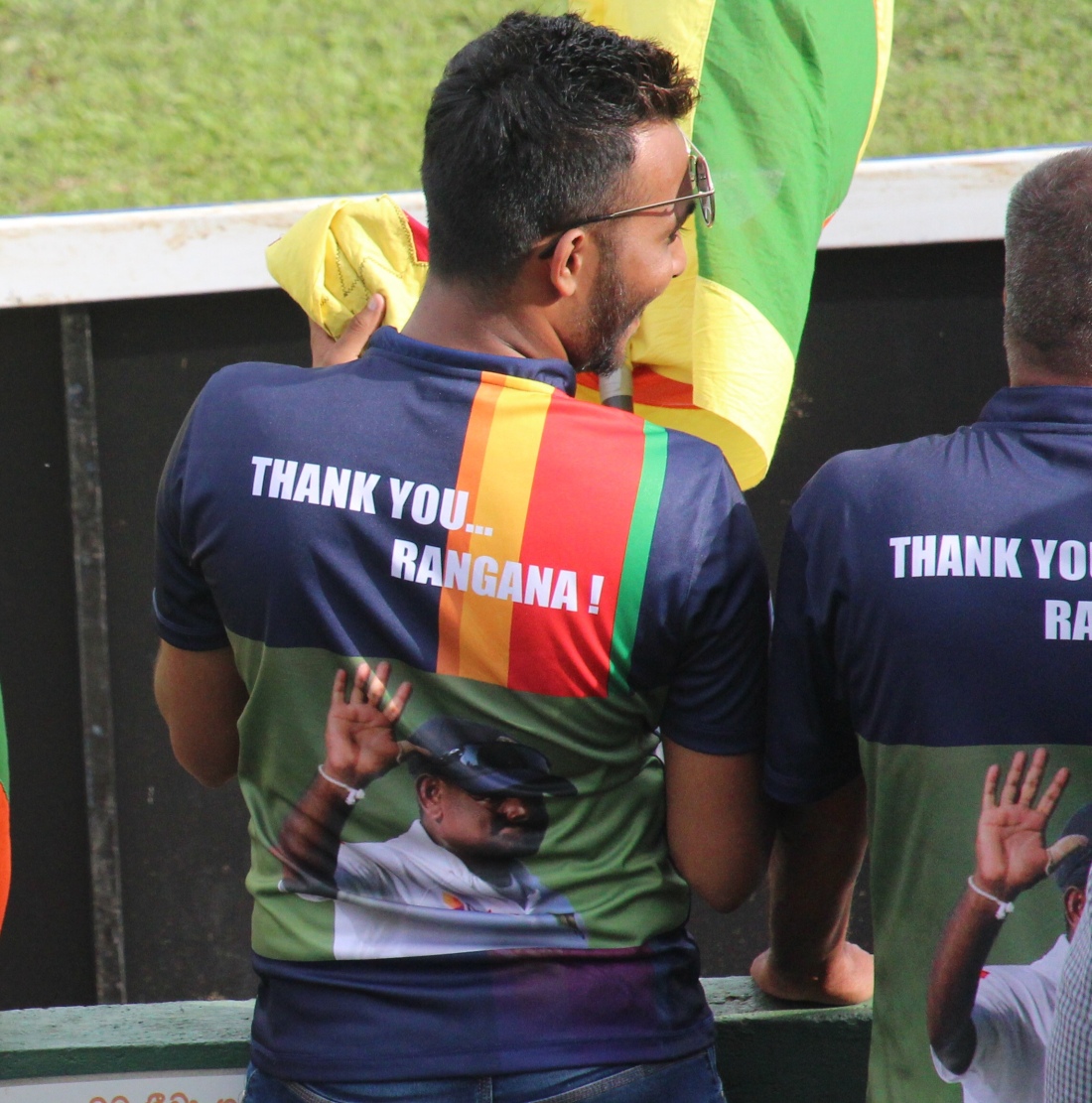 Day 4 dawned after a night of torrential storms and rain as prospects of play looked slim. However as the sun broke through and dried things out, play started on time and with it Sri Lanka’s hopes of delaying what is probably the inevitable. Moisture in this part of the world doesn’t stay around for long once the mercury rises!

The crowd is larger today after some needed a rest yesterday and the heat of the day before but strangely and eerily play has proceeded in almost total silence- I’ve heard more noise in church! Sri Lanka progress with few alarms until drinks and 50 on the board. However, the break brings a break in concentration and Silva leaves.

What is muddling is some of Roots field placing for his spinners- at one stage four on the boundary and close field looking a bit sparse. Gone are the days of not worrying about the runs and attacking and attacking but we shall see.

Debates continue about the declaration yesterday and the illogical decision to have Curran batting for one ball for no runs. The consensus is coming to a conclusion of muddled thinking.

However, what can’t be denied is the sheer excitement of watching England playing test cricket overseas. I am extremely fortunate to be able to do it and my emotions run from almost wetting myself with excitement at one end to feeling ready to spontaneously combust at the other! I suppose the former will help with the latter should either happen!

Sri Lanka lunch at 98/3 with the first falling straight after the drinks break and the last in what was the last over before lunch as Stokes worked up a head of steam as, after an appeal was overturned on review, there was a hint of copybook blotting but who knows?

I haven’t spoken much about the ground and facilities as there is little to say; a lot of the facilities are temporary or basic or both. None more so than the scoreboard which is just that – a board with minimal scoring information; the PA system seems only able to play music and no announcer at all and the video screen is somewhere in the distance but we survive!

Sri Lanka progress slowly as do England with the score zooming in on 190/5 as tea approaches. So as things move forward the more infrequent or unusual sightings start to be noticed – for example Stokes put his second slip back on the boundary for a couple of overs. I suppose I could be generous and call it a very fine third man and the other third man a square one but that’s all. With one/two others on the boundary, short pitched bowling was to be expected but then the double bluff of only the occasional ball got that high!

Another unusual sight is to see the keeper standing up to Jimmy- not a sight seen everyday and, be it far from me to criticise one of England’s finest ever players, but is Jimmy reverting to the action of his youth when he never actually looked at the batsman as he bowled ? There’s nothing here to excite the quicks! 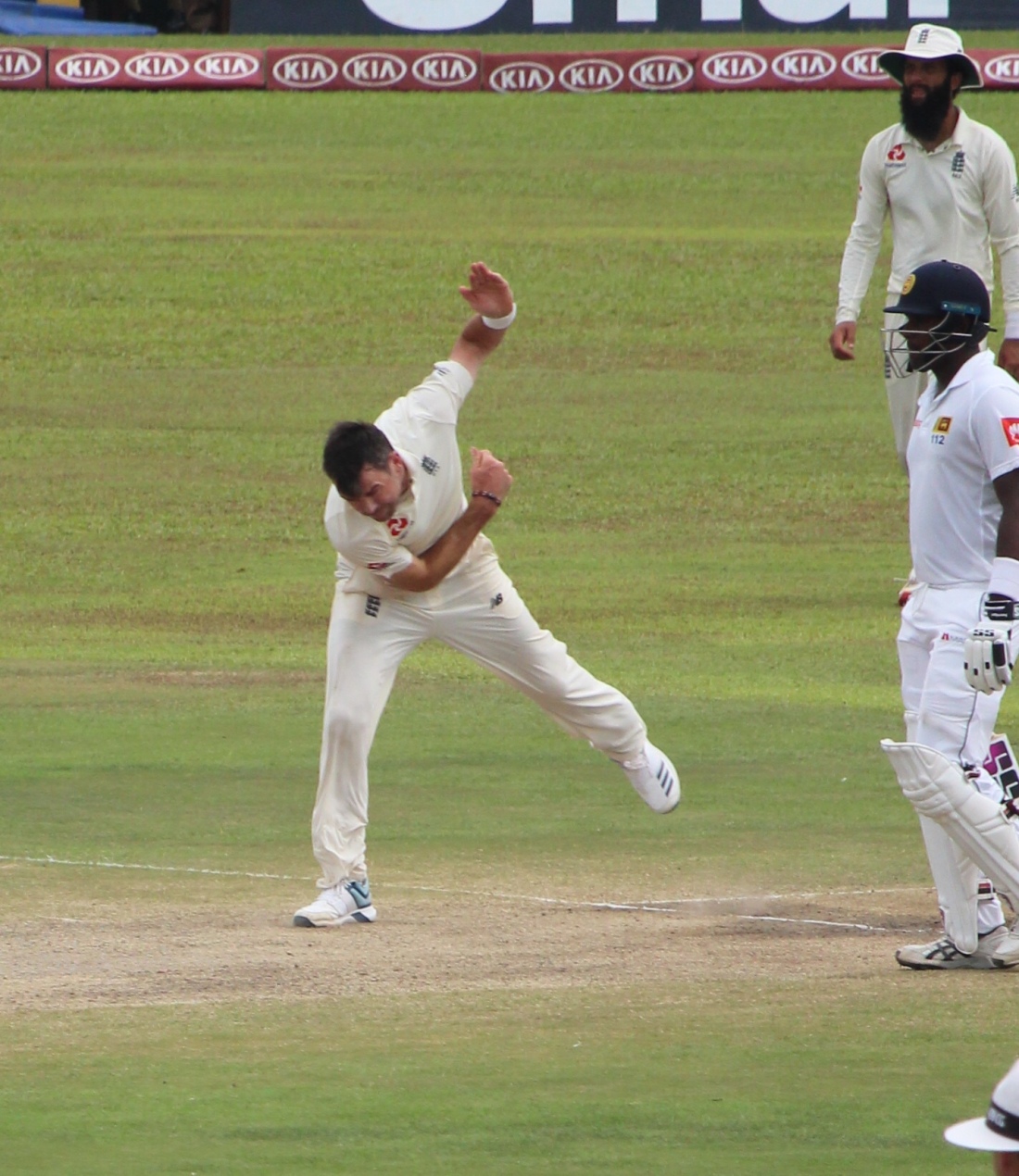 Which leads me into one of my favourite topics – team dynamics! The team seem to have jelled as a unit quickly after Cooks retirement with new players coming in but also the dropping of Broad and one less challenging character to manage, Root has visibly grown into the captaincy role in this game. Admittedly not everything has gone according to plan and there were times when more attack could have been useful but other than the first two sessions on the first day, it’s been all England. 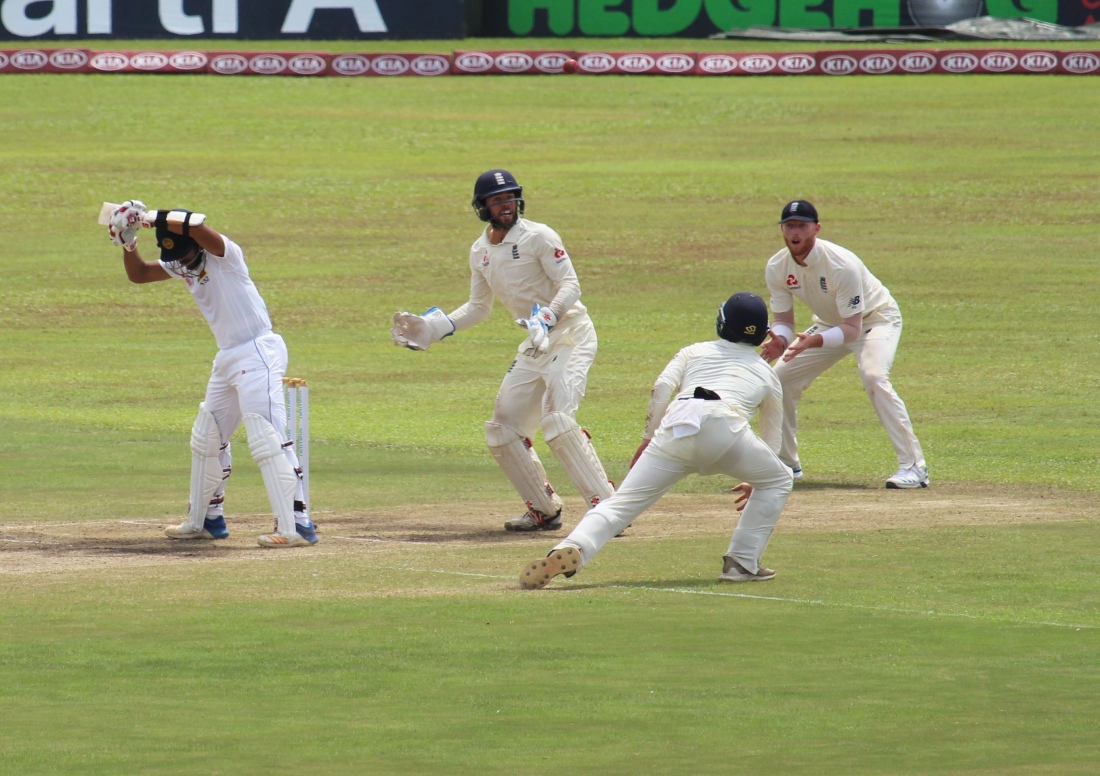 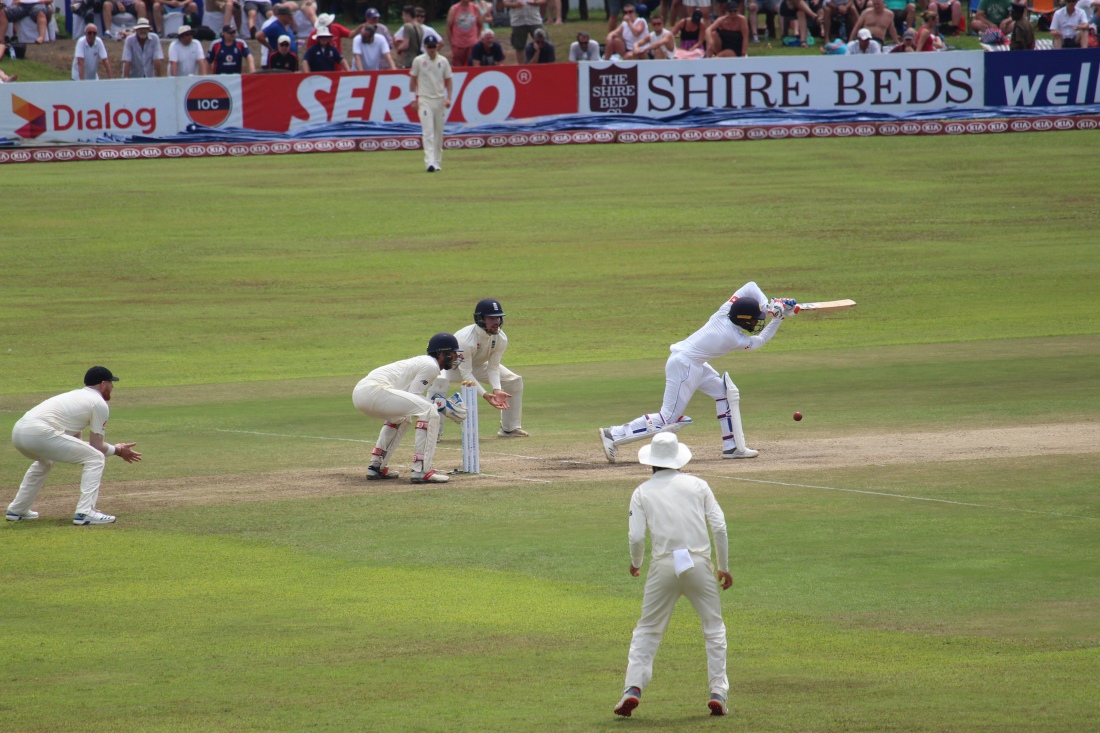 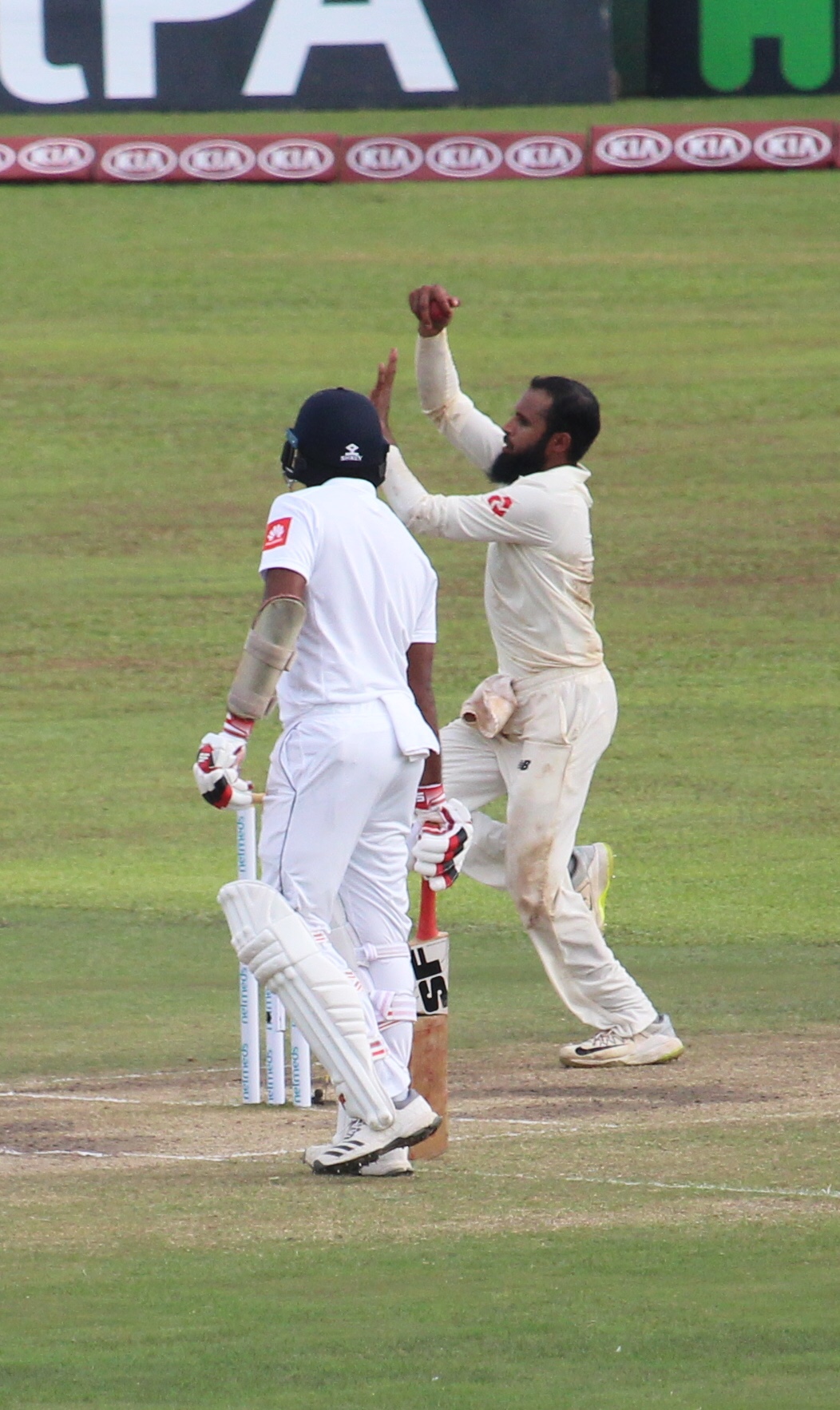 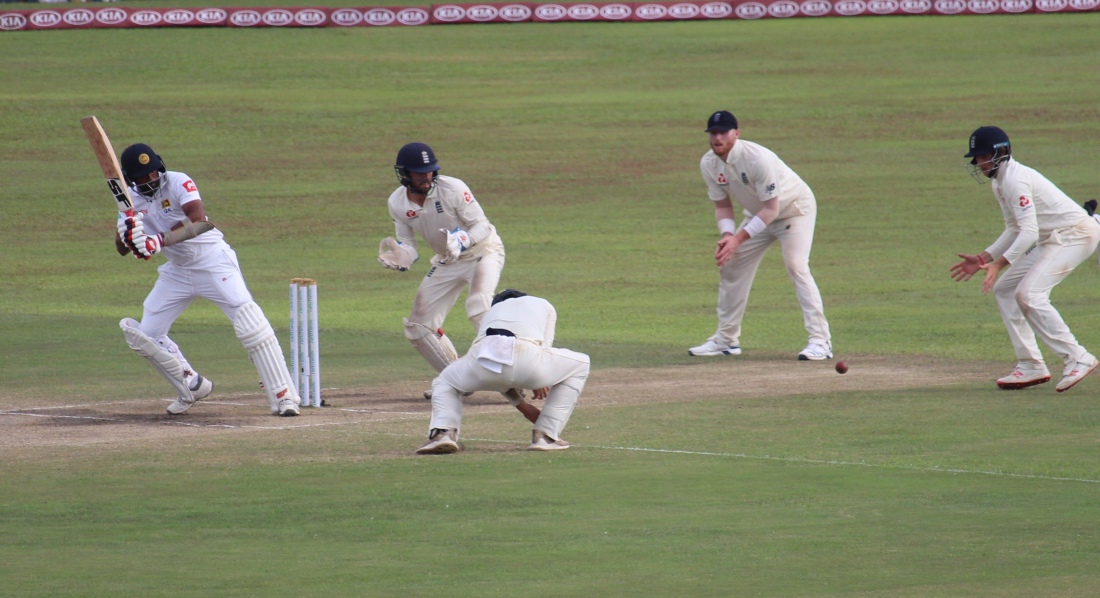 Looking ahead even though this game still has some life left in it, there are no obvious changes needed for Kandy (Bairstow is unlikely to be fully fit); and no place for Broad unless he and Anderson are rotated to extend their shelf life? But that’s getting ahead. I’ve been hatching a theory that Sri Lanka can find enough spirit and determination to take this into Day 5 but famous last words…

And following on from yesterday and the reception where Mike Gatting spoke, readers can rest assured that his skill at the buffet has not faded with time. The group I was in was being very British and polite and declining to take the last canapé on offer; that was until an arm shot past my right hand side, grabbed the canapé and ran off (well not quite as fast as he used to be between the wickets) but you can imagine the scene. The whole movement was as fast and as graceful as one of David Attenborough’s slow motion films of a lizard catching a fly! Gatting the Great Trencherman!

By the time is takes to read the above Sri Lanka collapse to 249ao just after 4pm, Mathews showed the best resistance with a fine 50 but no one was able to stay with him. Sri Lanka are a team in transition with the stars of recent times retiring as did another Sri Lanka hero today.

England win overseas for the first time in a while and for the first time ever at Galle. We have been exceptionally lucky with the weather based on every forecast seen. And give credit to Sri Lanka for a fine game- they are no pushover.

The celebrations including Heraths retirement were overshadowed by an attempt at streaking by a spectator. It needed over 30 police and security staff to detain him but he was clearly trying out the new guidelines for streaking negotiated as part of the Brexit deal…in that you keep some clothes on! Nonetheless the culprit was duly led away to await his fate under Sri Lankan law; and quite right too. 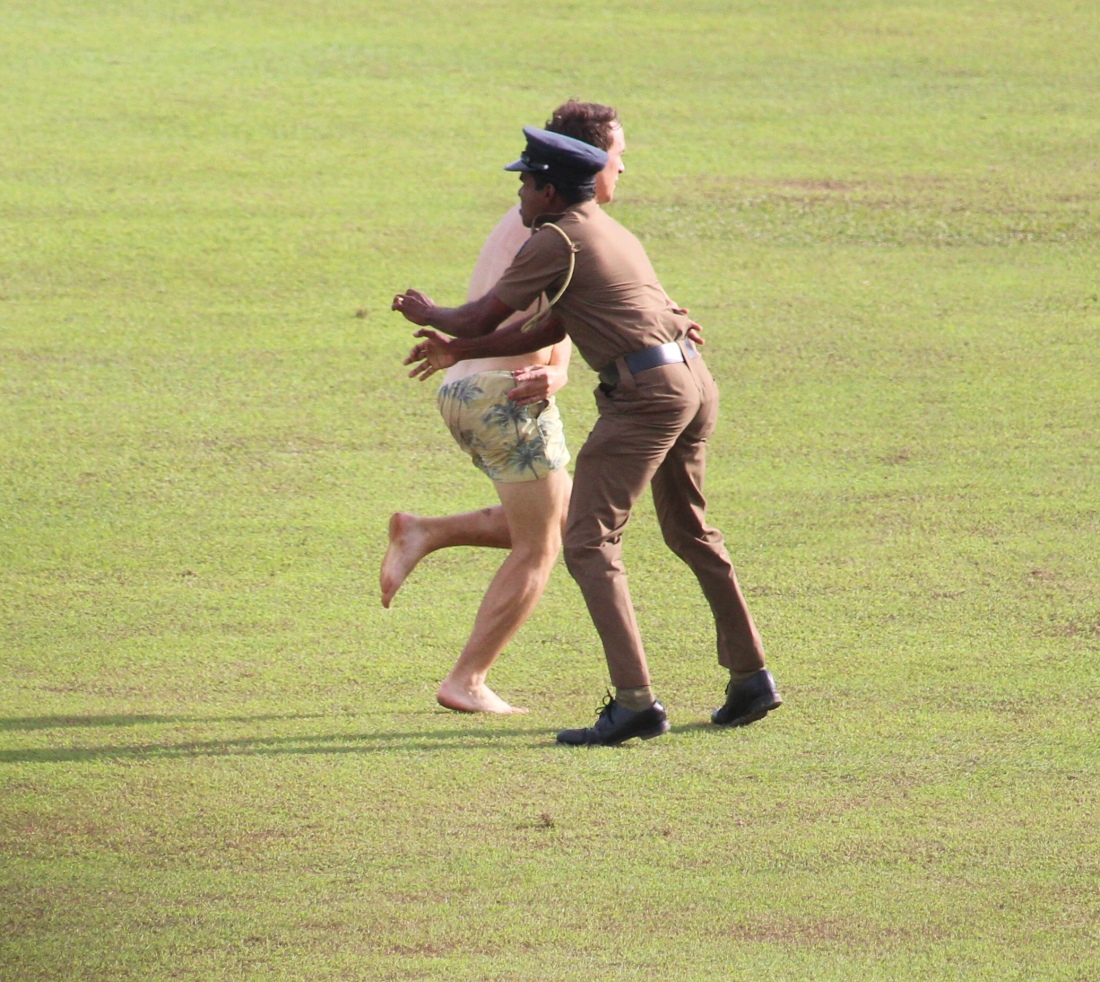 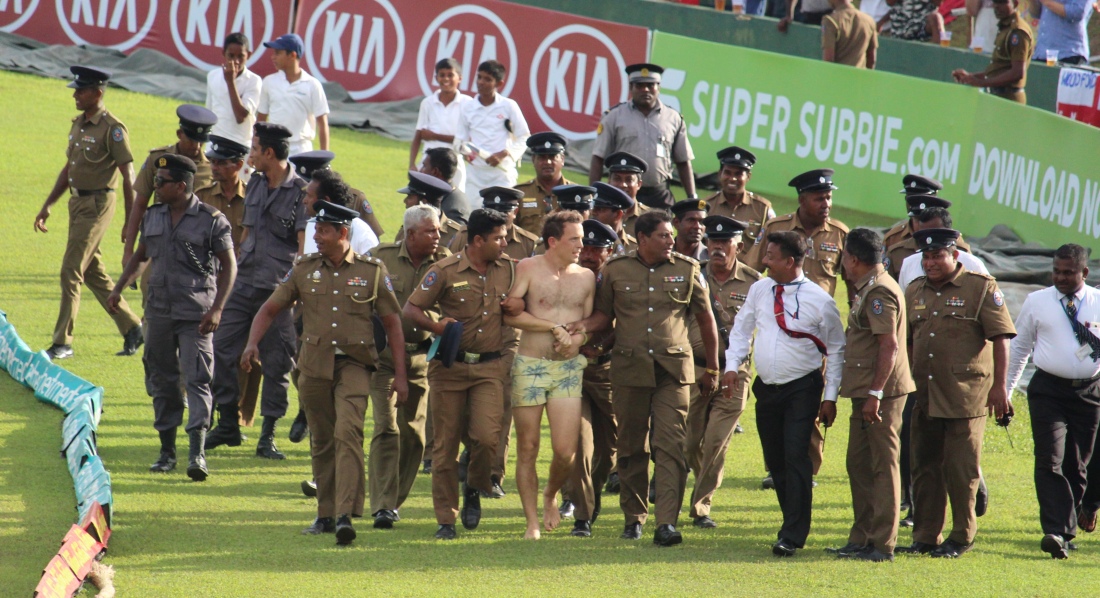 And finally…the new hairstyle of the England team is also revealed! 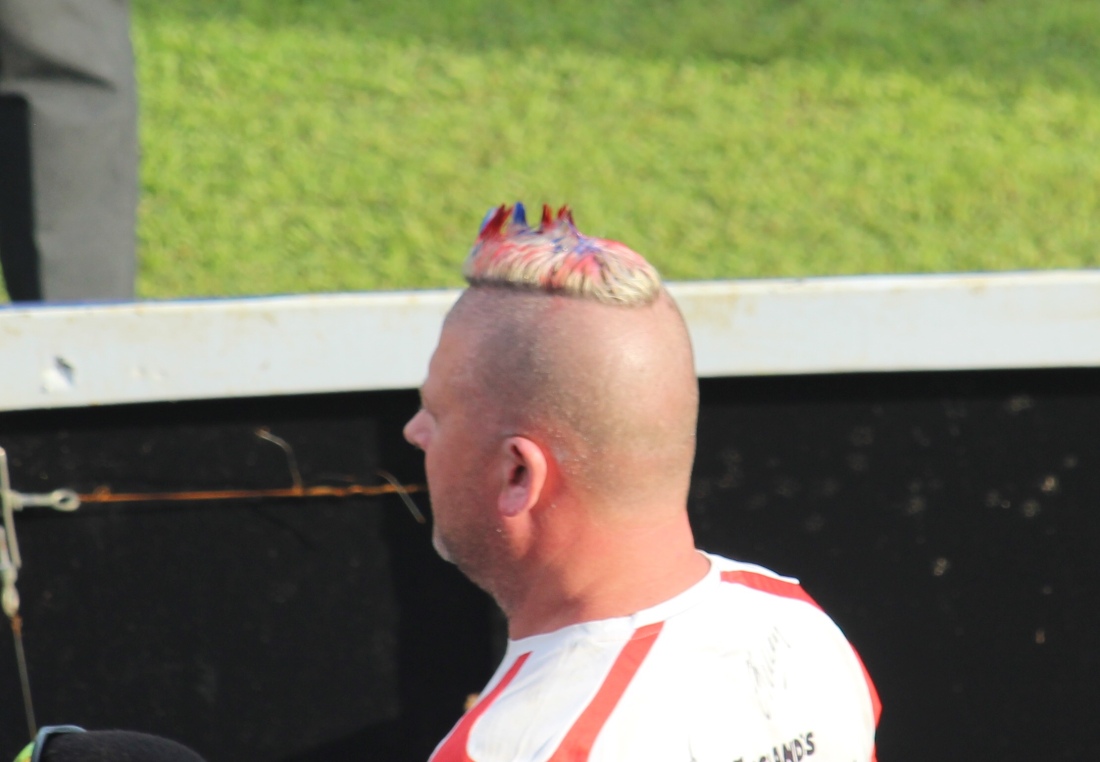