Another brilliant autumn day which was really at times as warm as a summer’s day saw me rock up to the Kia Oval (to give it its formal title) for Day 2 of the last County Championship match of the season – Surrey v Essex. The first day’s exploits were blogged yesterday but suffice to say Surrey appear to have little chance of getting back into this match.

Essex continue on their way and are not letting go of the trophy without a struggle and are putting Surrey to the sword – last chance to get one over, psychologically at least in readiness for next season! Westley reaches his century in a quiet and unassuming, modest way, no histrionics, no rash shots…just got on with the job. Coming in yesterday after 11 wickets had fallen for next to nothing, it needed someone to show that they can bat on this pitch (if only because the clatter of wickets can get into your head!) and can get their head down and graft…he did just that. Good to see that there’s at least one Englishman who doesn’t sell his wicket cheap. Found wanting at Test level last year and cast off like an old jacket but he has time to come again.

Surrey are missing the ‘Curran brothers’ (sorry it makes them sound like Wild West outlaws or East End gangsters when they are nothing of the sort!). They bring variety, light and shade to the Surrey attack who all today are having an off day – or as The Times article would have us believe ‘tired’ after a long season. I can hear the ghost of FST on TMS chuntering away!

Nonetheless as the torture of the champions continues the sun shines, high-ish clouds bring the occasional cool spell of no more than a minute or so from the non-stop sunshine and warmth. Even warm enough for dragonflies!

The new ball is taken immediately and if anything quickens the scoring rate and not the wicket-taking rate as Essex lead by over 200 at lunch with six wickets still to bat. On the stroke of lunch Westley falls for 134 – a fine innings. And the question to pose is…do Essex have enough already?

With the Oval being on the flight path into Heathrow there’s always plane spotting for the enthusiast as well as the cricket should things get slow. Today you just couldn’t do that – I managed to avoid Wheater’s six into the lower Pavilion sightscreen by just being four seats away and with dragonflies also around…there are a lot of flying objects today!

In the afternoon the torture turns into a game of ‘guess the declaration score’. Leads of 250, 300 and 350 come and go, personal milestones are passed and carried forward.

Wheater and Harmer add over 150 between lunch and tea – no wickets fall for Surrey – and on the stroke of tea Wheater is injured and whilst carries on for 4 balls, does not re-appear afterwards. He retires hurt for 68. Harmer bats and bats and bats – passing his best score for Essex and eventually before he runs out of partners, his best ever first class score of 102* as Essex declare  at 477/8 – Surrey need 411 just to make Essex bat again, let alone anything else.

Burns and Stoneman come out to an unenviable task and the latter starts off as if he has a train to catch. Surrey need to bat for two days or 212 overs (min) to save the game (and given that the Essex innings lasted 140 overs and Surrey’s first attempt only 26…you see where I’m heading. By the end of play Surrey reach 88/1 and still a long, long way to go.

There are times when one watches or attends cricket matches that things border on the surreal. Today fell into that category and I ended up smiling to myself about the weird nature of the whole thing or am I the one who’s ‘odd’?

So…in what other sport would you have grown men congregating around either the playing pitch taking photos of grass growing or around TV pundits as they try to broadcast and interview with erudition and skill during a break in play or even…and now it gets even more mad, grown men taking photos of the advertising mats nailed to the ground and then someone taking of photo of them doing that…and I found myself doing all three! Time I need to get out more! (But that could be the problem!) 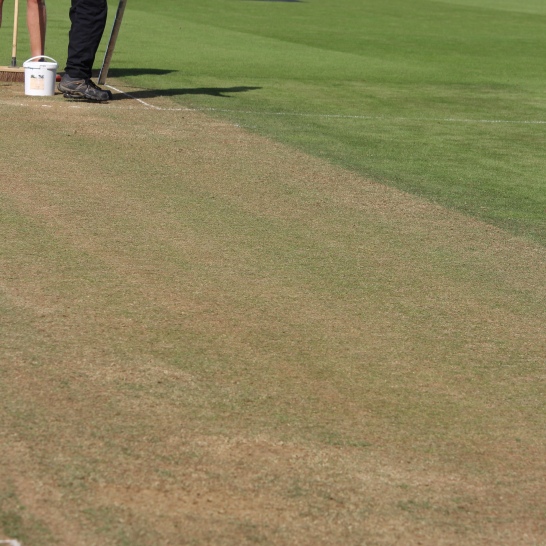 And yes Nasser…it all seems as if you too have drifted into the world of Franz Kafka (and no…he didn’t play for Worcester in the 1960s!)