Third game in three days sees me at Chelmsford for Essex v Hampshire in Division One and a mid-table clash to boot! Neither are secure from relegation but neither seems likely for the drop. Day one was rained off – but it didn’t rain all day I’m told – yet the pitch looks the driest of the three I’ve seen so far and looks ideal for batting and to take spin late in the game.

Officially this is day three but only the second playing day. Essex crank up 435 and five bonus points with Lawrence scoring a century yesterday and added to it this morning. Early inroads into the Hampshire top order sees them 44/3 at lunch – the follow on target of 286 seems a way off – numerically and mentally. Vince is batting after lunch having been released from the carnage of the test side under skies which offer sunshine and cloud in equal amounts. 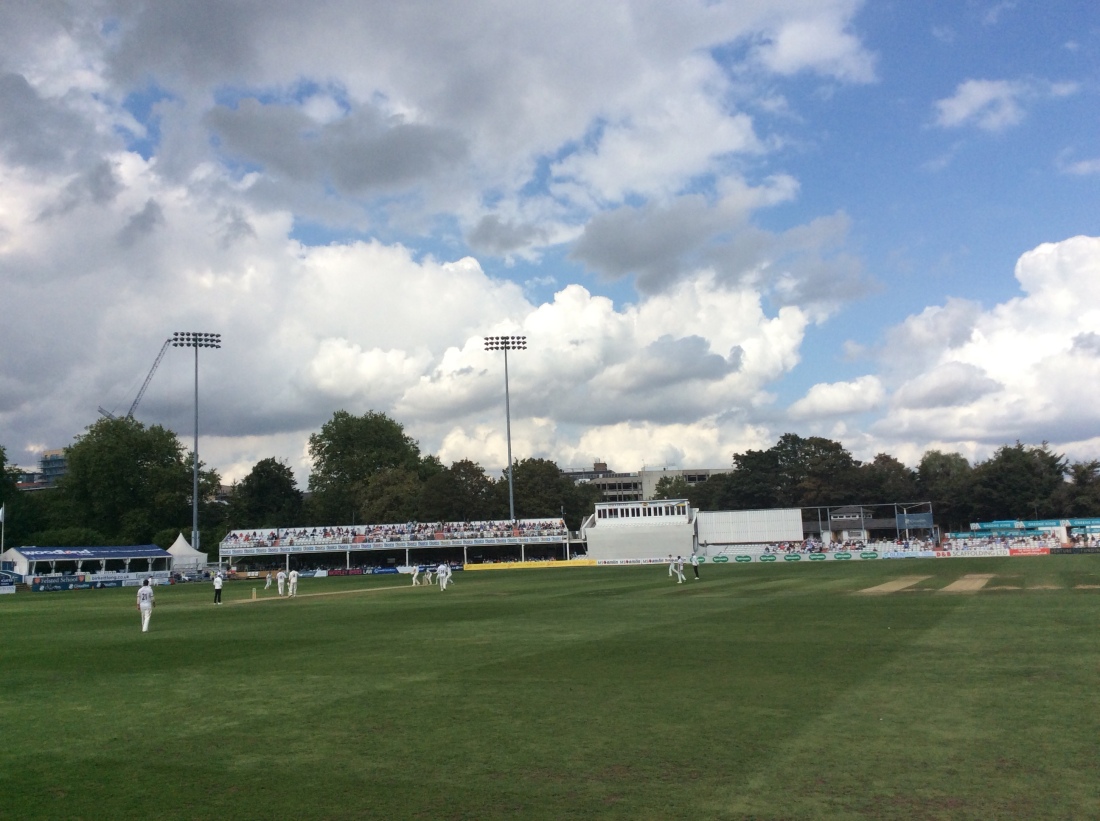 My confusion comes from two areas – and if you remember the spoof comedy soap opera ‘Soap’ from the 1970s, it’s just like that! Ian Holland is playing for Hampshire- nothing startling in that – but he’s an American educated in Australia playing cricket in England and named after a European country! Confused? He could be! I am! 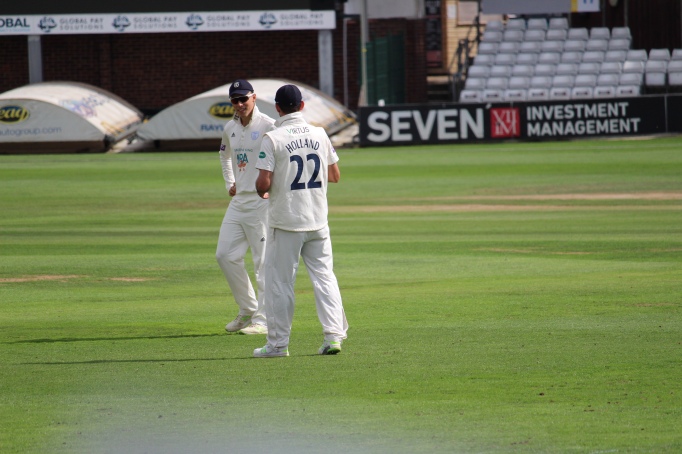 I’m also confused by the level of security experienced this week – Lords undertake a full bag search and body pat-down (to be expected, a world class and important venue), Chelmsford just ask me for any glass I’m carrying (why just glass? Why not other eating and drinking accoutrements – china plates, knives, forks, spoons etc) and the Oval just welcomed me in! Confused? Is there a standard? If so what is it and is it being applied or is it the decision of the venue’s management?

I’m also convinced that the Championship is run for the benefit of the Department for Social Care! Where else can you corral a lot of old grey men for hours and days at a time, feed and water them so they can do no harm? Fortunately I’m not yet officially old nor grey as intravenous Grecian2000 has worked wonders for years!

So you can see I’m on a trail/thread – old TV programmes; 1970s spoof soap opera Soap, the Old Grey Whistle Test and…Essex please get your free Wi-fi sorted! It’s dire! Are you running it on a Shoestring? 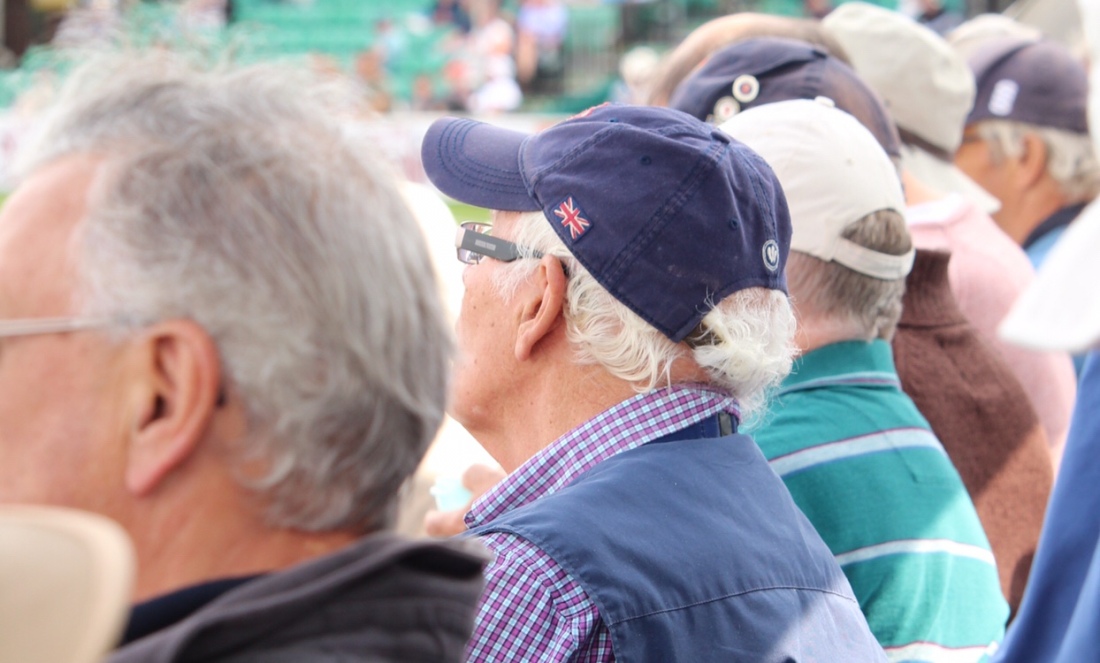 Tea sees Hampshire having crashed to 117/8. Most batsmen were undone by the combination of fast bowling at one end and Harmer spinning his magic all afternoon – and into the evening – from the other. Only Vince showed some tenacity with a determined 26 but the scoring came to a long halt in the mid-60s. Dawson and Abbott both ex-Test players as bowlers are showing more stickability after tea and take the score to close in on 150…still 130 away from the follow on. By 5.15pm Harmer is given a rest from his marathon spell of 27 overs paused only by lunch and tea and replaced by Porter (also released by England) who takes the 9th wicket with his third ball. Wickets are being shared around including Bopara. No quick has bowled more than 14 overs so far so should be fresh enough for the follow on innings.

Results have come through in the other two matches I’ve seen – Surrey win by an innings and some, Middlesex by 55 runs. Both games took 2 days and 2 sessions…not an advert for the four day game! On that basis we should finish here at Chelmsford by mid afternoon tomorrow! The result for Middlesex gives them an outside chance of promotion but results and weather need to both work in their favour whereas Surrey’s win sees them at this time 55 points ahead of Somerset but their game is still in play. Surrey look for all money, and have played like this for some time, champions elect. And from what I’ve seen so far this season, have the strength and skills and squad in depth for a few more in the next few years.

What does the loss mean for Sussex? Who knows…were they miffed too much by the appeals being turned down yesterday? Did it play on their mind? I don’t know and can’t comment knowledgeably since I wasn’t at Lord’s today but it’s been said before, this game is played in the head.

And who says this is a cushy number watching all this cricket?

An injury to Wheater (Essex’s main keeper today…have we seen the last of James Foster?) meant that he was substituted after lunch and by another keeper after tea – it seemed like Jamie Porter after lunch but no, just a borrowed shirt to confuse people; but by Michael Pepper after tea. Oh for Sussex to play Essex with Salt on one side and Pepper on the other and if Phil Mustard umpired…!

The last batsman preserved well but Hampshire succumbed to 172 ao and followed on and lost two early wickets before Holland (hopefully not confused) and Abbot as night-watchman kept some order. Looks for all money like Essex’s win tomorrow – 8 more wickets needed or for Hampshire to bat and bat as if their lives depended on it. Their only hope is for a Vogon battle cruiser to land on the outfield but that’s a likely as a repeat of the Goodies and The Hitch-hikers Guide to the Galaxy on TV! Oh, nostalgia…better than it used to be?