After a gap which seems to have been forever, it’s back to the reality and the best challenge of the summer of the County Championship.

Today we continue with the pink ball day/night series with Surrey v Lancashire at the Oval.

The feedback I can glean is that this approach is not having the expected outcomes – attendances have not increased, results are exceptionally one-sided depending on the make of ball used, players are not that enamoured and numbers at the end of the evening session lower than daytime game. I sense that it’s an experiment that’s had its time.

In the interim we’ve had the media scrum surrounding sportsmen and excessive drinking and more than enough had been written and blogged without adding any more…and anyway there’s the sports internal discipline processes to go through too.

But we’ve also seen the best and the worst of this wonderful game – the degeneration of the club and league game to an extent that more umpires are refusing to officiate and bowlers deliberately bowling wides to deprive a batsman of his first century. But then TMS came to the rescue with another pro-am match! The sheer joy and fun displayed by all was a wonder to behold – shame that it hasn’t got a wider audience and a few more famous or well known faces (but then I inhabit a parallel universe and wouldn’t know them any way…perhaps Swann will last a little while in his dancing shoes so that at least I’ve heard of one person!).

Ed Smith – he of the sinister dark glasses and suit but also test selector – has given things a shake. Buttler was an adventurous choice early in the summer, Curran S was inspired if not shabbily treated, whilst Rashid was unexpected. Smith is prepared to hire and fire and take unusual and unexpected decisions for the benefit of the team in the short term. His longer term strategic approach had yet to develop which is surprising given his media background and more considered approach. He needs to tread a path which keeps as many happy as possible across the first class game and has yet to develop a wider strategy- let’s see what transpires.

We reach the first break- still called lunch when every other match approaches tea – with Surrey 110/5 after winning the toss and batting on what looked from afar a pudding coloured pitch with tinges of green. I say pudding coloured in the sense of school dinners steam puddings of yesteryear. All the signs were that this pitch would swing or seam – the latter more likely as the clouds were high and interspersed with sunny intervals, increasingly so as the day progressed.

Both openers were back in the hutch with 21 on the board, the third by 28 and the fourth by 51. Surrey were rescued by Finch (Aaron of that variety) and Curran (S)…released by England and welcomed to the middle with one of the best rounds of applause for many a day at a County Championship game. Curran T being rested! Finch fell for 43 but his off drives were something to behold- as Richie used to say, worth the admission price alone!

Lancashire must have welcomed the chance to bowl and Bailey obliged with the first three and a catch for the fifth. The pitch is probably one where you are never fully ‘in’ and batsmen will need to work for their runs; we shall see once each side has batted.

Spare a thought for Ben Foakes…last winter toured Australia as England’s second keeper; he did no wrong, didn’t get that many games (not his fault), and kept his name out of the headlines. But now…Buttler is in the test side and could be second keeper (some say first), and with Pope getting the call before Foakes (and a reasonable keeper I’m told), what can Foakes do? Try to get in the test side as a batsman alone…or keep doing what he’s doing as arguably the best keeper in England? Shame to have been treated in this way.

But the carnage continued into the second session; there seemed to be an urgency to get Lancashire batting as soon as possible and definitely under the lights when the theory goes that the pink ball will swing round corners! But that’s not always the case.

Surrey falter to 211ao thanks to a 56 run partnership between Dernbach and Morkel…two unlikely lads for Surrey if ever you saw one! Jade D…for tis he of the tattoos and T20 captain… attacked the bowling with relish with a limited range of shots. In the overall scheme of things these may be the winning margin? 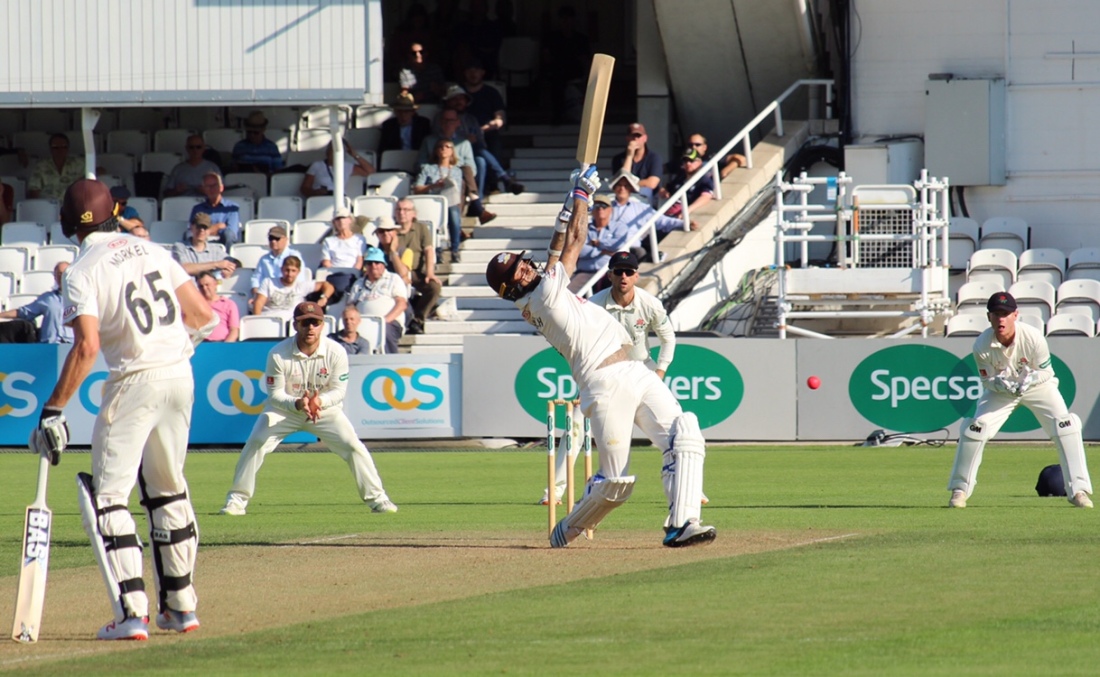 Early inroads into the Lancashire top order are the order of the day and four fall as night falls; the crowd drift away…after all, have you tried public transport on a weekend evening? But back tomorrow for more! After all, it’s the game that counts!

2 thoughts on “Back to reality…of red and pink and puddings!”