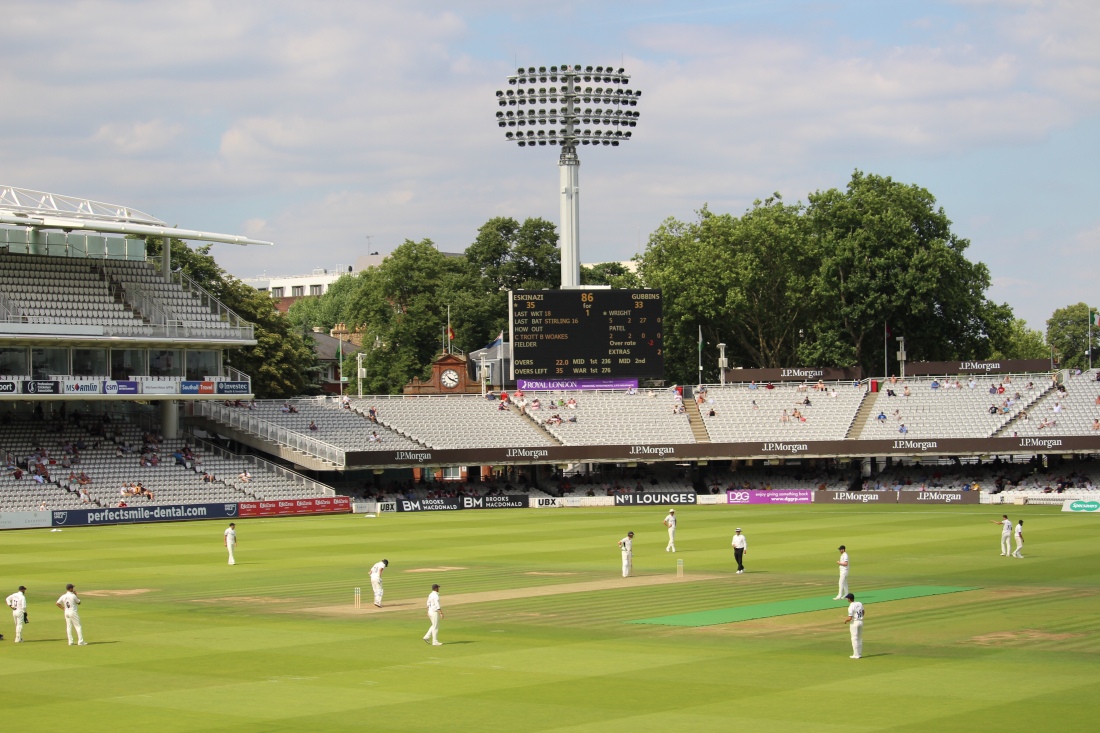 Lord’s looks perfect…in 30C temperatures – this is one of those photos you look at in the cold of winter to remind you of times past and times to come!

And so to Lords where Middlesex fought back to be on almost equal terms by lunch on this day – day 2. Warwickshire were dismissed after a bit of messing around after lunch for 276 – a lead of 40 which on this pitch could be useful. Again all the wickets bar one fell – as I call it – behind the wicket as has the first in the Middlesex reply; 20 of the 21 to date gone in that style.

The views of some readers regarding yesterday’s ladies day are understood but we live in a democracy and so everyone has the right to express themselves and I suppose I’ll just have to disagree with the ‘traditionalists’ for once…but how demeaning women over the years has become a tradition is beyond me but let’s leave it there.

As tea beckons with the rates for maiden overs and runs returning to the expected norms for county cricket Middlesex progress to 87/1. It’s not spectacular but then the game needs to be played over longer than a day or a few hours.

Just as the hundred partnership comes up at a reasonable rate, Gubbins falls for 47 when he deserved a half century for sheer application- so at 119/2 the lead is just 79 but Malan and Morgan to bat!

But the wheels start to come off…Morgan still in one day mode, Malan not quite there and Middlesex end the day 6 down and a lead of 143. I fear this match will not get into the fourth day but if Middlesex can eke out another 50 then spin which is starting to take over could mean Rayner has a match winning role to play.

The pitch looks drier today and less green as the heat breaks 30C in London. It’s still a bit on the slow side and the number of leg before dismissals is increasing; I think it needs application to play well which Rhodes did for his career best 118 and second first class hundred and I don’t think you’re ever truly ‘in’ but it’s a funny old game as we know and wait with intrigue to see how things pan out tomorrow.

But playing on this requires hard work!