Jake Libby bowled by Wagner…51; and stump in mid-somersault.

Those of you mature enough to remember the quiz Blockbusters and enjoyed the contestants asking Bob Holness for a p, would regard Tom Moore’s innings of 87 in 80 balls with 7 fours and 7 sixes (70 out of 87) as a blockbuster as he played on one leg with the other injured. He strode across the Notts innings and the day’s play like a colossus (ok Colossus had two legs but you know what I mean).

So returning to Chelmsford for the third day of the Essex v. Notts match (3rd and 4th in the Championship before this round began) having taken a day off yesterday dealing with another p – three pricks for my first set of injections for my upcoming visit to the England tests in Sri Lanka. Another three will follow in due course once I’ve organised them but am now an expert on how to avoid rabid dogs and cats, bodily fluids in the wrong place as well as unsanitary or unclean medical facilities but to eat fruit which I have to peel! Clearly travelling is more involved than people think.

By the time I arrive Jamie Porter (another p) is in full flow and bowling without any luck as the Notts batsmen constantly play and miss. Porter – one of Wisden’s five cricketers of the year – is destined I’m sure to play for England but he seems to be nowhere near the current progression of Lions to ODI to Tests; he was picked for the Lions tour last winter but missed it due to injury. The Essex faithful will want him to play for Essex for as long as he can. Today was one of those days where there was no help from the pitch for the quicks; you needed to keep it pitched up and the wickets will follow. Porter may just be regarded as an English domestic specialist and may struggle on overseas pitches but he is repeating the form of 2017 into the Spring and early Summer of the 2018 season.

The pitch looks increasingly straw coloured as we reach day 3 and has the potential to be a batsman’s paradise but with 15+ wickets falling on day 2, perhaps Essex were still in one day mode but looking at the points table (another p) Essex and Yorkshire have the fewest batting bonus points for any team in the first division and the way the Championship is panning out, those extra points could come in useful.

Nottinghamshire seemed to have caught the bug of poor batting and their performance (another p) was below par early on – Essex kept nibbling away, Porter’s early display was eclipsed by Wagner’s pre-lunch spell of tight, penetrative and quick bowling and wickets fell with increasing regularity. 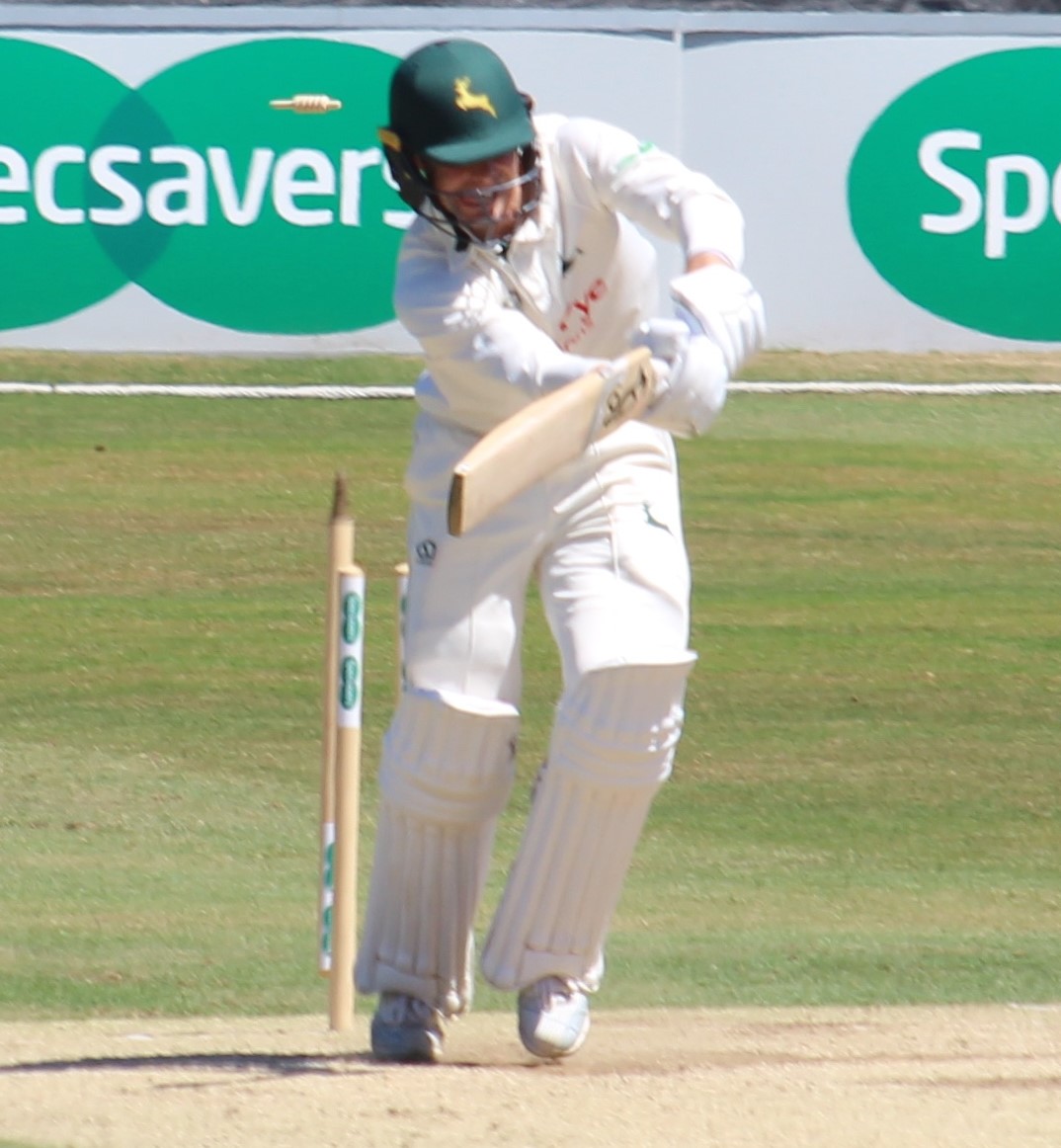 P for pointed end of the stump! Libby just didn’t see it as he was bowled by Wagner for 51. (This shot being a few milliseconds before the one at the top of the blog).

Playing (another p) and missing seemed to be the order of the day before lunch as Root showed only too often whilst Taylor, Wessels and Patel fell. 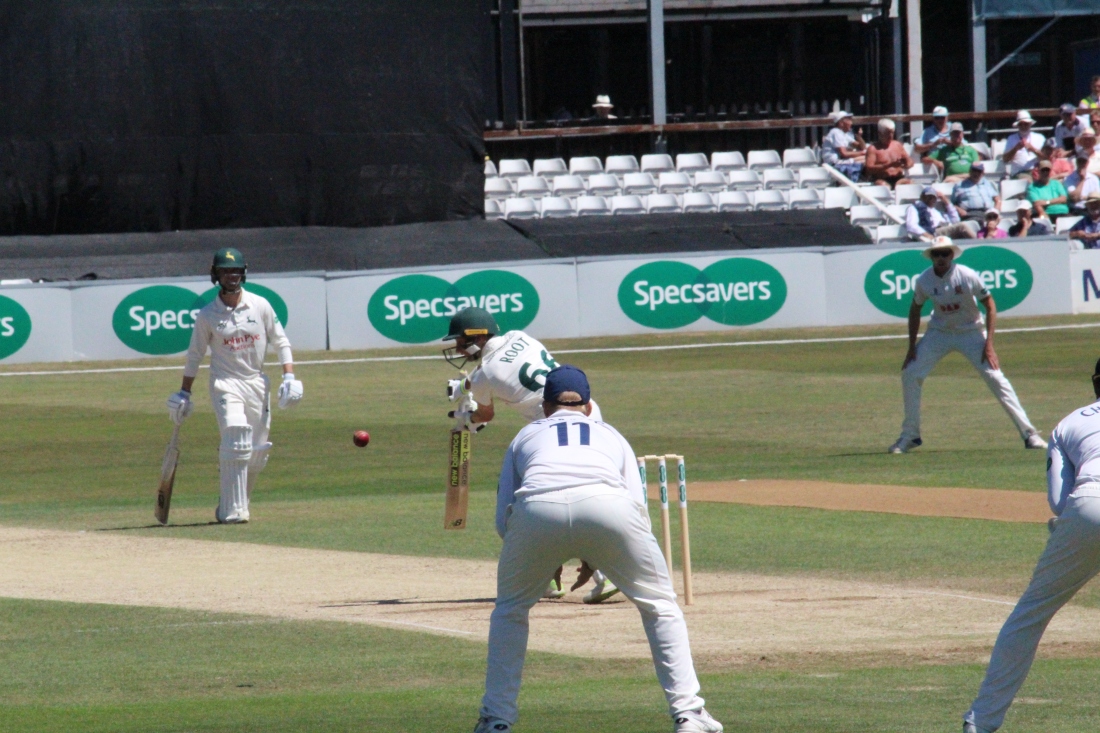 By early afternoon Notts had reached 143/7 when Tom Moores entered the fray accompanied by a runner as he had twisted his ankle earlier in the day. Tom is son of Peter (ex-England and now Notts coach). There was little expectation among the crowd as Tom’s highest score to the end of last season was 41…so he won’t be around for long and with a runner there could be some fun and games! But no…he is a clean striker of the ball and was soon dispatching the bowling to all corners; as other batsman fell, he farmed the strike brilliantly and forsook so many singles that a century would otherwise have been there for the taking. Harmer was dispatched for 26 in one over, Bopara (eventually brought on as an alternative to the mauling being given to every other bowler) went for 13 in one over and was not seen again. Porter tried but was off target compared to his morning spell; Wagner, Quinn, Coles – all were treated with distain and fielders retreated to the boundary – four increased to seven and even nine at one stage – and the Essex performance became an embarrassment – not the style of the Champion County (I think their crown will be going elsewhere come September).

Moores batting was fierce hitting and clean striking of the ball but allied with clever placement and on occasions, just sheer brute force, often ignoring his injury to play a range of strokes (some of the Essex faithful began to doubt the extent of his injury…but then adrenaline was pumping!). 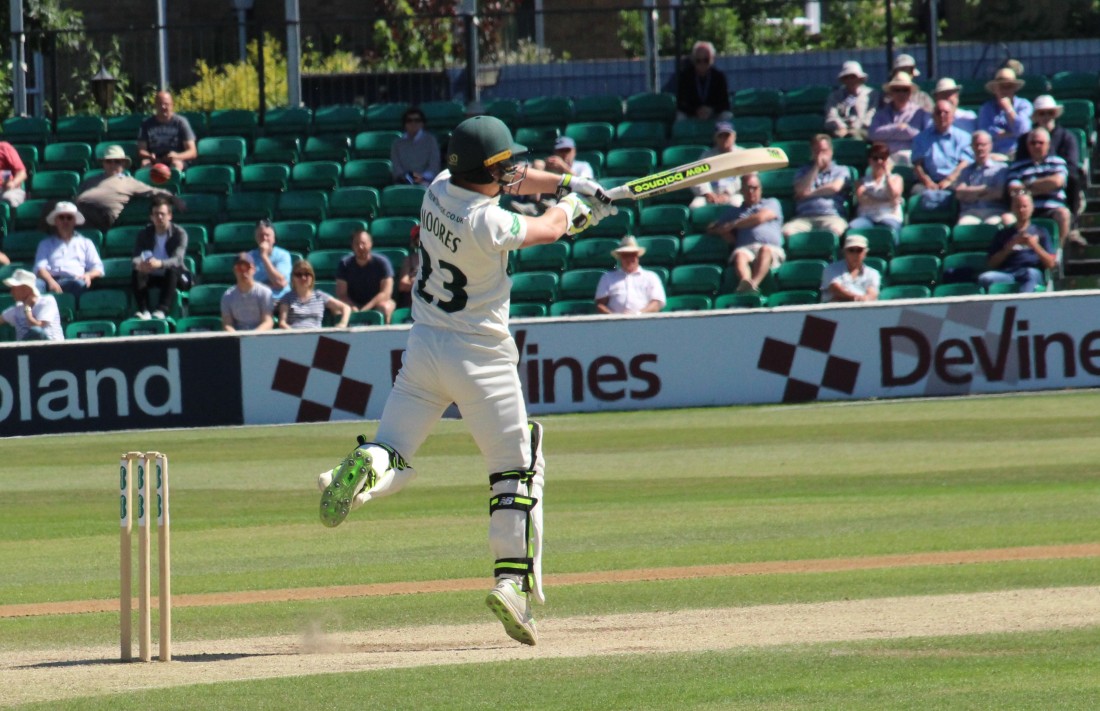 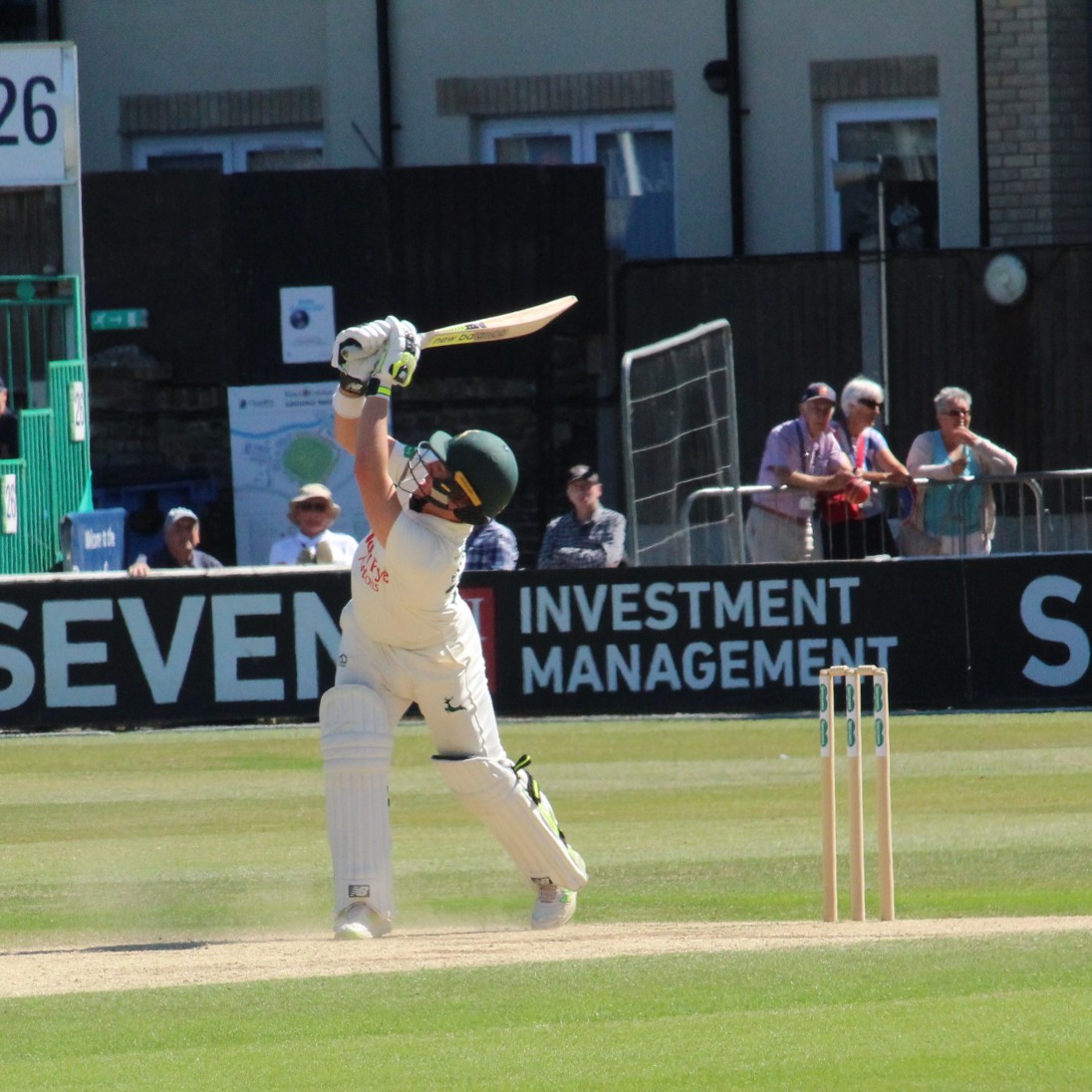 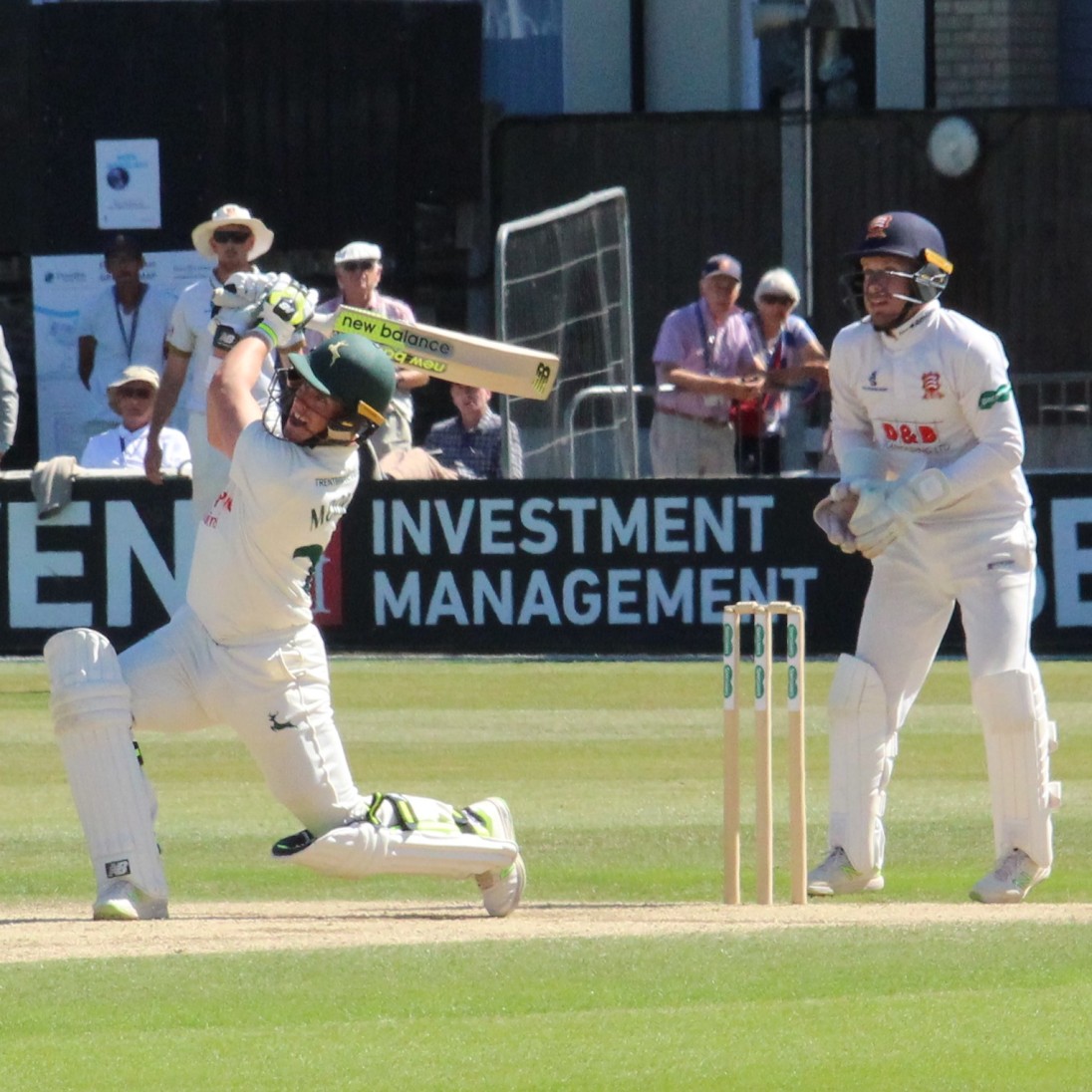 The pitch looks a batting paradise but from day one there has been a bit of inconsistent bounce increasingly as the pitch dries out under the Essex sun and the Notts spinner (who is held in high regard) should be eager to bowl.

So if one player on one leg can score 87 at more than a run a ball, how could Essex do with eleven players with two fit legs each fare in chasing down the 4th innings target of 441?

The inconsistent bounce did for Cook (lbw b Millnes 0) at 6 for 1. There was once, it seems, an unwritten theory that England captains were never given out lbw (after all the crowd have come to see him bat, not the umpire umpire) but once you’re an ex-England captain…anyway.

The wheels came off as Essex struggled against a fine attack and their own minds – this game is played in the mind as well as on the pitch – and chasing 441 for one of their largest ever 4th inning totals to win may seem beyond their mental and playing powers – one last p. 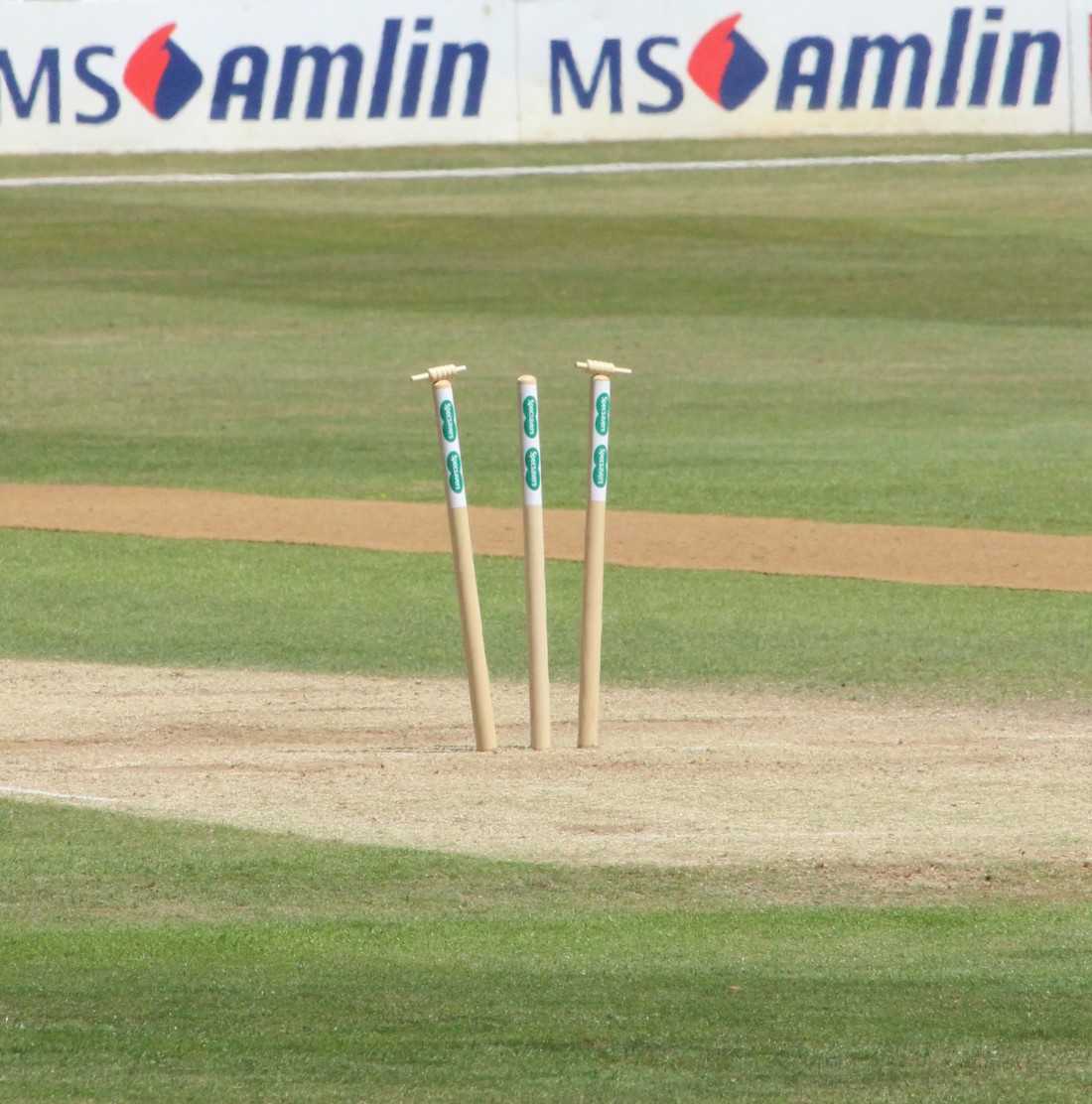 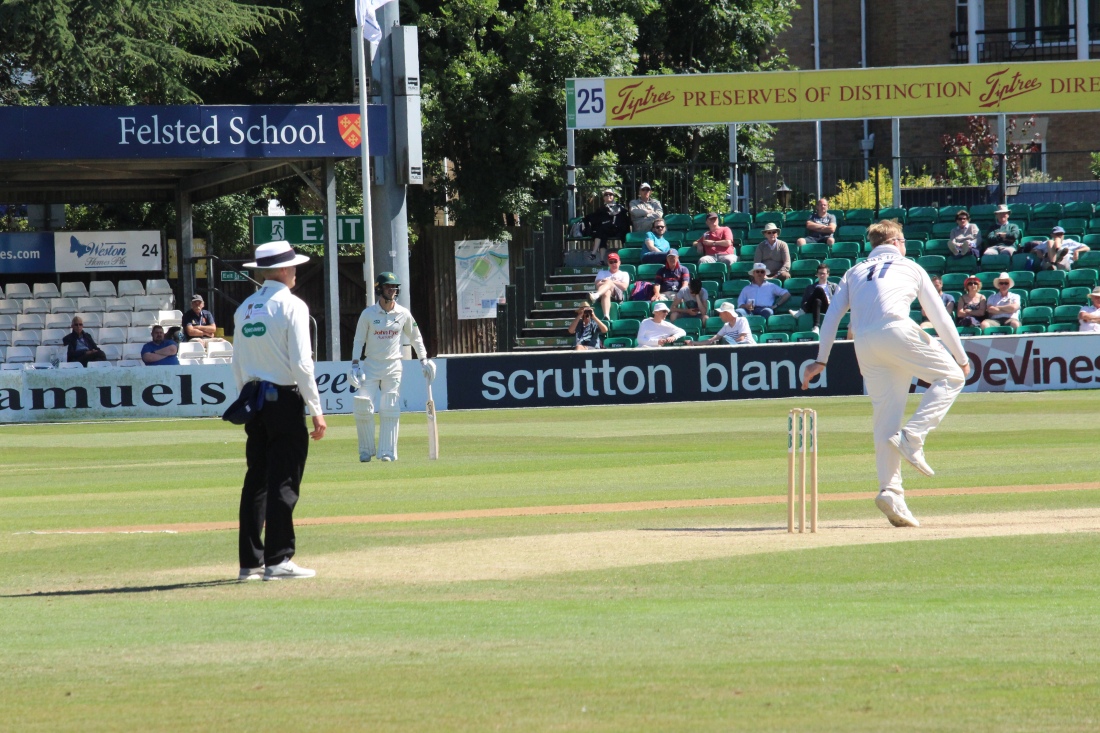