Professional sport is played to such a high standard that the smallest of nicks, pushes, prods, lobs, kicking errors, footballs slipping through gloved goalies hands can each mean the difference between winning and losing.

But here today at Chelmsford in the last day of this particular odyssey these fine margins came into play in the Essex v Glamorgan Royal London one day cup match and in the Glamorgan innings…fine margins in the occasional missed chance, the umpire looking the other way during a run out attempt and the difference between class and average seam/swing bowling. But I suspect will not matter too much in the grand scheme of things.

This match pitches the bottom two teams in the South Division…a win for Glamorgan would still leave them bottom whilst a win for Essex means the possibility of moving to at least sixth. All teams are so close it’s only really Glamorgan who can be ruled out of reaching the knock out stage. Essex need an overwhelming win to increase net run rate as this will come into play I’m sure.

Essex reduced Glamorgan to 58 for 5 and 100 for 6 but let them off the hook so that they reached 200 ao in 48.3 overs. They really should have got a lot less as Porter’s fine bowling more than admirably supported by Cook (S) had the batsmen playing as if the pitch were made of treacle. No footwork or sloppy footwork, and tentative play played in Essex’s hands (and occasionally out with the missed chance or drop) but Essex lacked the killer punch helped by some odd bowling choices…Harmer didn’t turn his arm over but Bopara and Coles had extended runs.

I suppose the thinking was swayed by overhead and forecast conditions – overcast and cool, rain yesterday and overnight with the prospect of lights on from ball one but not so far! The pitch unaffected by the weather looks from afar as dry(ish) but with a green tinge again, I suppose, adding to the idea of all seam bowling and to field when winning the toss (why the common approach now of ‘bowling’ when winning the toss as opposed to the traditional ‘fielding’ I have no idea. The team bats or the team fields, the team does not bowl! Ok, I’ll put this hobbyhorse back in its stable!).

So…Essex need 201 to win but also need to win well within the 50 overs to increase their net run rate which will become key in deciding the final positions – in both Divisions. There was some uneven bounce in the Glamorgan innings but little seen in the Essex one. The Glamorgan bowlers knew they faced a challenge but Smith went for 20 off his first two overs (I think he tends to fall over in his follow-through and needs to amend his run up) and was cast out to the deep! Nonetheless, Chopra and Wheater go off like a steam train careering downhill with no brakes at well over 6 an over for a good period of the power play.

Sixes and fours fly in all directions and all of a sudden it’s a different game to the one I watched this morning – the Glamorgan body language says it all after just 10 overs…they know they’re heading back over the Severn Crossing sooner than they think. Two chances in the same over go begging (over 21 by which time Essex are 125-0 with Chopra 56 and Wheater 66) and it’s these fine margins which can decide games but Essex are so far in front that Glamorgan need a Vogon interstellar battle-cruiser to land on the outfield if they’re going to salvage anything from this game!

Seems that Essex will win between overs 30 and 35 but the question is who will get to their century first? This is turning into a bloodbath.

The answer is neither as Wheater is out for a fine 88 – despite his odd stance and feet angled at 135 degrees to each other, Chopra is also denied his as Westley comes out to score the winning runs in the 32nd over – the team ethic is more important than individual goals (and he did have loads of opportunity to score faster) – memories of Hick being stranded on 98no after an Atherton declaration come flooding back – he too had his chances for a century in an Ashes test; but talking of team ethics and past glories…look who’s talking? 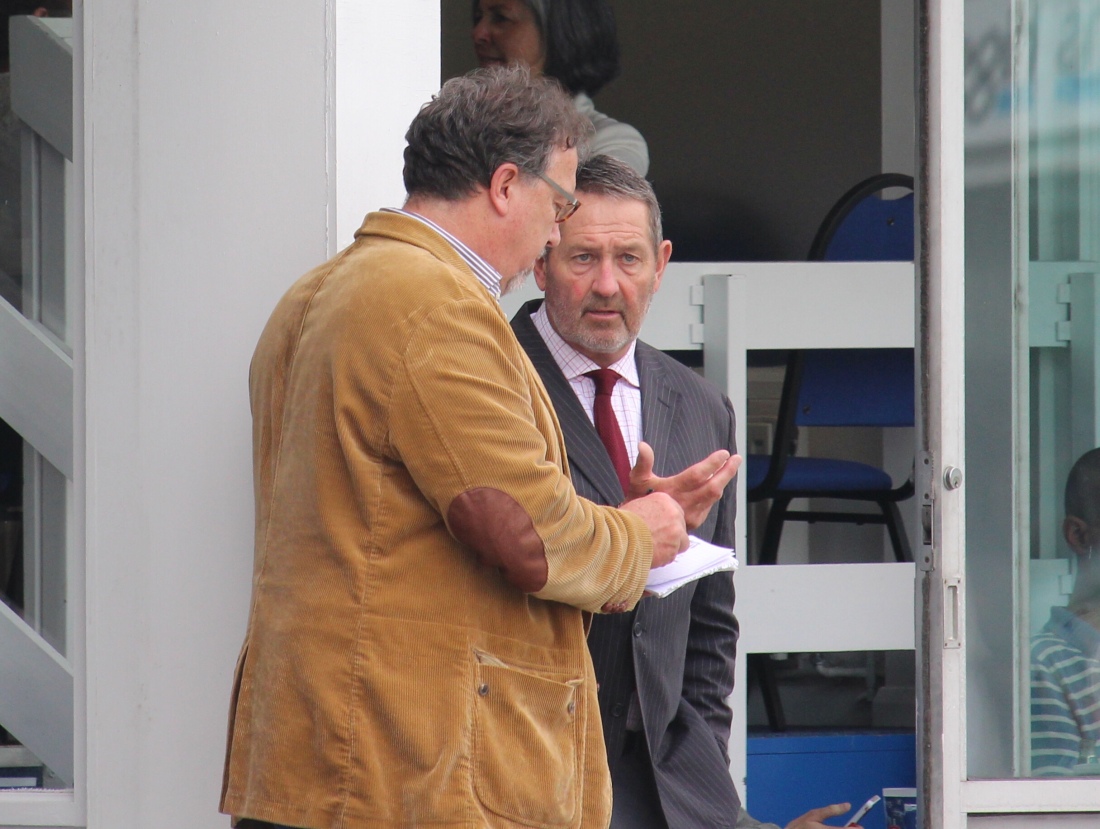 I reckon these two know a thing or two about the game but still return to their Chelmsford roots from time to time (Pring is probably after a scoop?)

So this little odyssey ends having seen a rained off day, good and poor one day games, the atmosphere, sheer delight and pleasure, and that indescribable thrill that a Lord’s visit and Test can bring and the variety provided by the Aviva final – all reaffirming that there’s no better way to spend a few days than watching good sport played well!

Next week is quieter with only three days of cricket to see – two trips to Lord’s and one to either the Oval or Chelmsford (can’t decide which) – one day cricket for the Royal London Cup and then a chance to reacquaint myself with Australian cricket (no DIY involved) at the end of the week.

And finally finally…the delight of blogging! I had no inkling when the first ball was bowled today that I’d be writing about margins, treacle and bloodbaths…but then life is full of surprises and better for it!