My skill as a batsman was very limited but I know from watching and listening over the years that rhythm is vital. Footwork, lines, pace, and a good pitch all add to the confidence, establishes a rhythm and good form.

Whilst this morning at Chelmsford may not have seen all the answers, Lancashire have progressed to 84/2 without too many alarms. Habib was kind enough to hold his pose for a split second after he played down the wrong line early on and the wreckage above is testament to Porters skill as a bowler…admittedly he had softened him up earlier in the over so playing the Bakerloo was just a sucker punch.

Davies and Livingstone seem to be relishing the challenge of scoring 320 to win and have found some rhythm and form so far. The sun has dried the pitch a bit, it’s getting dusty with the odd puff from time to time and all adding to the restoration of better cricket. How the afternoon pans out…

It’s possible to tell when Porter is bowling with your eyes closed – the amount of ‘chirping’ from the fielding side increases exponentially as the batsmen try to cope. I hope it’s harmless ‘chirping’ and nothing else. All you can hear from the boundary is the volume and not the words!

Essex look like the side to beat this year from what I’ve seen so far but what worries me about this team is the advancing years of key players – Foster closing in on 38, ten Doeschate 37, Bopara 33, Chopra is in his early 30s and will Cook return to the fold once he retires from tests. The modern way seems to be to step back from everything. So whilst there’s some young blood here, the middle and lower order can’t be hanging around for too much longer…time to expose the new blood from time to time.

But what do I know? The afternoon swings back to Essex as Lancashire have tea on 231/7 – 5 wickets in the session for 149 runs; or so we think…the scoreboard went blank at 2.15pm and no life has been breathed into it since. The PA announcer is doing his best but it just goes to show how much spectators and players rely on the scoreboard- perhaps it’s been hacked for its secrets. It’s not the best when working but when there’s nothing!

Anyway, wickets fall at regular intervals. Davies scoring a fine 70 (or so we think) whilst the lower middle order of Lancashire all rounders flourishes with a couple of them making half centuries.

Chanderpaul’s stance is getting squarer by the match and his slower reaction speed as he ages may have done for his lbw dismissal. 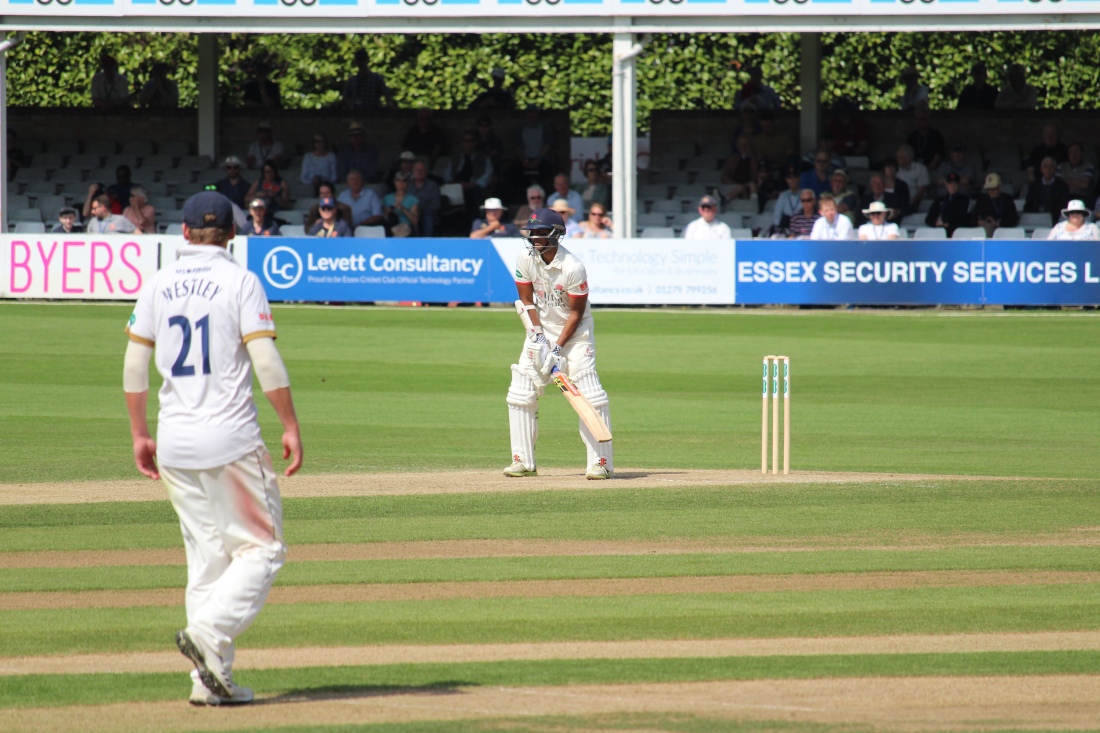 …and after tea, fielding kneeling down (another first, never seen that before)

But by an hour and a bit after tea, it was all over…Essex winners by 31 runs but could have been even closer. Lancashire are a side that never gives up and it was not until Porter took the new ball that the end came. Fields reminiscent of Brearley’s infamous one day field with everyone on the boundary (Essex kept a slip and keeper) tried to keep things very quiet but leaked runs really.

The combination of Porter and Harmer in harmony is something to behold and Essex need to keep these two in cotton wool if there are to retain their position and the rhythm of the spheres is maintained.

This is a text widget. The Text Widget allows you to add text or HTML to your sidebar. You can use a text widget to display text, links, images, HTML, or a combination of these. Edit them in the Widget section of the Customizer.